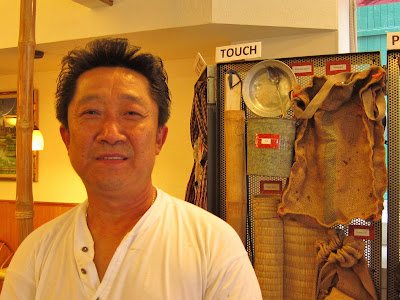 Sam (Seng) Ung cries quietly, dabbing his eyes with a crumpled tissue, as Tom McElroy reads aloud a harrowing passage from Sam’s book I Survived the Killing Fields. If you want the epitome of someone crying with dignity, Sam’s the man.

I’m at the Wing Luke Museum in Seattle’s Chinatown/International District, just a few blocks from Sam’s restaurant Phnom Penh Noodle House, for the book reading. A few weeks ago I wandered past the restaurant and noticed a big sign in the window about Sam’s book. Intrigued, I went inside and bought a copy from his lovely daughter Dawn, who works in the family business.

Although I had plans to meet friends for lunch elsewhere in the I.D., I decided to come back for a meal soon. Who can resist a wonderful bowl of noodles?

I noted the date of Sam’s next reading and plowed through the book—a quick but sometimes difficult read, with a few flashes of humor. (When he was new to America and cooking in a burger joint, the waitress gave him an order for a burger but told him to “hold the onion.” How, Sam wondered, was he supposed to cook a burger while holding an onion?)

When I was a carefree American youth, Sam was living through the insanity and Hell on Earth that was Cambodia during the Khmer Rouge regime of the late 1970s. He writes of being captured and interrogated by Khmer Rouge soldiers while out trying to find food for his family, seeing people around him murdered on a whim, watching family members die of malnourishment and untreated ailments, and much more. It goes on and on, with scenes of terrible suffering coupled with Sam and his family’s amazing resilience and endurance. 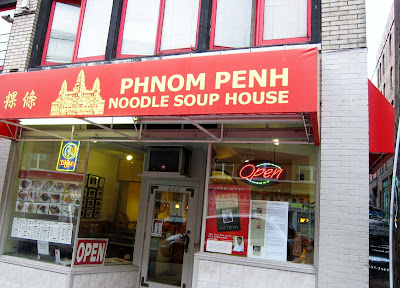 Sam is standing at the entrance to the museum in jeans and a T-shirt when I arrive for the book reading. As I introduce myself and shake his hand, I immediately sense a warm, gentle, and welcoming man.

After Tom, Sam’s collaborater-writer, finishes reading, someone asks Sam, “Does this hit you every day as you work and live?”

Slowly, he nods his head yes. “I’m sad every day about the camps.”

But he says he got through that time by looking on the bright side, looking forward. One valuable distraction for him was writing down recipes he picked up from watching other cooks as well as his own concoctions. Sam had cooked at his family’s restaurant in Battambang, Cambodia, as a teenager, and dreamed of having his own place some day.

Which brings us back to the noodles. In 1987 Sam opened his noodle house, the first Cambodian restaurant in Seattle, 7 years after arriving as a sponsored refugee. He's now a respected local chef. Well-known Seattle chef and restauranteur Tom Douglas brings his interns to visit Sam, who also happens to be a master fruit carver.

My cousin and I dine at Phnom Penh Noodle House a day after the book reading. We both order the Battambang vegetarian noodle bowl, which is a bargain at only $5.99 for a huge bowl of thin rice noodles in a savory-spiced sauce topped with a hard-boiled egg, ground peanuts, cilantro, bean sprouts, and pickles. My cousin adds fried tofu to his order. 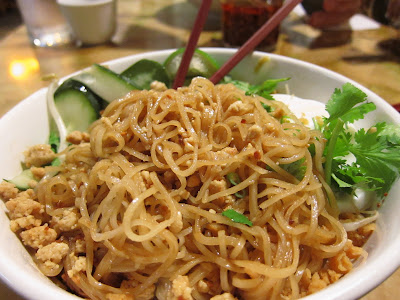 One of Sam’s three daughters notices me staring at my big bowl. “Is this your first time here?” she asks. When I say yes, she tells me to mix and stir to blend it all together. Good advice. I uncover more sauce with the noodles at the bottom of the bowl. I can only finish half and have a great noodle breakfast the next day.

For a man who witnessed the worst of humanity, he’s a man of inspiring humanity. As Sam concludes in his book, “We have to remember we are all human, and everyone on this planet needs each other and we are all connected…We need to learn to forgive each other. Along with forgiving, we have to learn to respect others.”

Phonm Penh Noodle House is on King Street, just a block south of Jackson, the main street that bisects the I.D. Click here for a map and directions. Sam is there cooking every day except Wednesdays.
Posted by jill

We've eaten there together and It was FAB! Would love to go back!

Hey Deb!!!
You and I ate at the Noodle Ranch up in Belltown...this is downtown in Chinatown. Have you been there too? Would love to see you again sometime!

Jill, wonderful article- I am moved to read Sam's book and meet you for some noodles. I can tell you are touched by his story, courage and big heart. Thanks for sharing!

It’s a wonderful article and made me teary…..great work Jill!!!

Thanks Jillian! Soon, will be in touch.

Thanks Carina, glad you were moved by this inspiring story!

what an amazing story! Let's go as soon as you are back, and I want to borrow the book too!

While I generally celebrate nature and our environment here at Pacific Northwest Seasons, this year at Thanksgiving I'm feeling especi... 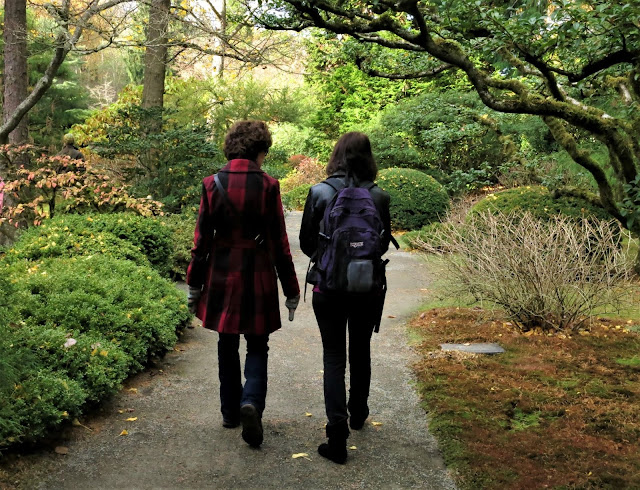