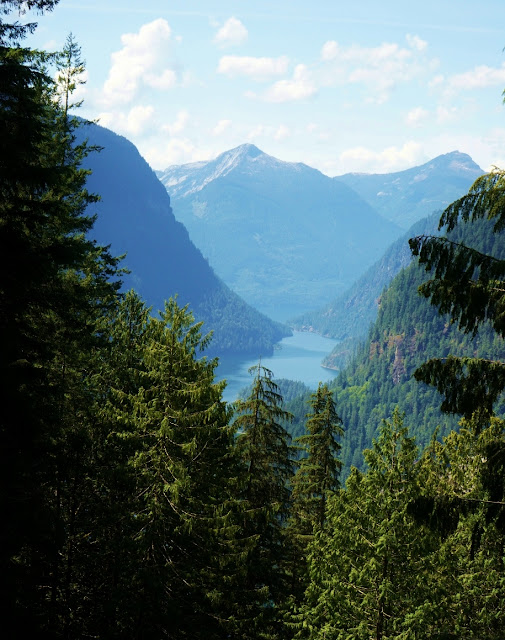 This is the second of three posts about a recent sailboat trip up the Sunshine Coast of British Columbia north of Vancouver. Read the first post and see a map of our journey here and check out the third post here.

After a long day sailing and motoring almost 50 miles up Jervis Inlet to Princess Louisa Inlet, we crossed the narrow threshold into a place of tranquility and dramatic beauty. I felt a sense of reverence as we cruised onward.

Princess Louisa Inlet, tucked deep into the Coast Range of BC, deserves all the superlatives thrown its way. Magical, majestic, sublime, and so on.

According to the Princess Louisa International Society, a nonprofit dedicated to preserving this special place, it's the only true example of fjordland on the Pacific coast. I'm not sure exactly what they mean by "true fjordland," but it's certainly lovely.

We motored slowly up the gorge, traditionally named swiwelát (which means sunny and warm), toward the far end where there's a BC marine park dock for overnight mooring. Towering overhead are granite walls rising steeply a few thousand feet, with long thin waterfalls streaming down and surrounding slopes thick with evergreen forest. 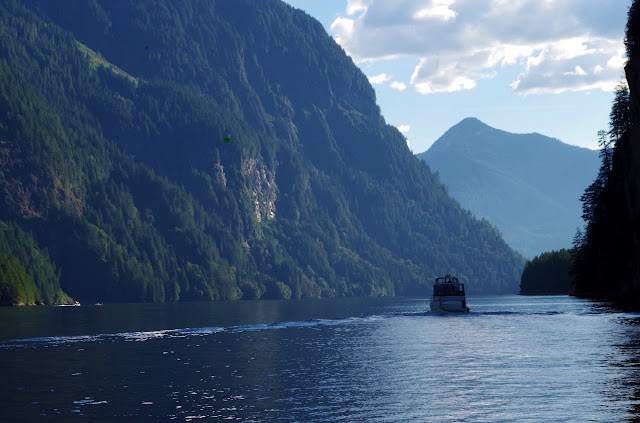 This late in the day, the sun had slipped behind the surrounding mountains, leaving the end of the inlet in shade. When a boat ahead of us turned around and headed back down inlet, Mark called out.

"Are there no spaces left at the dock?" Nope, they confirmed. So we also turned around and headed to a cove a mile or so back and tied up to a mooring buoy beside forest-covered MacDonald Island.


When we saw a dock across from the island with standup paddleboards, Mark thought maybe they were for rent from the marine park. But after getting settled for the night in the placid cove, we noticed cabins in the woods and kids talking and laughing. It's an outpost of the Malibu Club camp called Beyond Malibu, where teens take off for backpacking trips in the surrounding peaks.

Needless to say, a sense of solitude in wilderness was not our experience there. However, it was still wonderful and quiet in the late evening and early mornings.

After a tasty dinner on the back deck of Aeolus (I took charge of meals), we stayed up well after dark to see the Milky Way and a few shooting stars. Light pollution up there is minimal.  While I can pick out the Big Dipper and Cassiopeia, Mark pointed out other constellations and even saw Andromeda.

I love the calm and quiet of early morning.  When I awoke before the sun crested the steep walls enclosing the inlet, the still water reflected like a huge mirror. 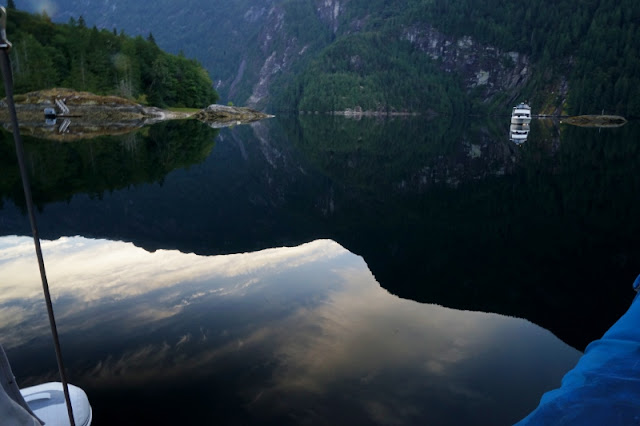 On this, our layover day, a rigorous hike up to the trapper's cabin above Chatterbox Falls was the plan. After breakfast, we motored up to the end of the inlet in the dinghy and tied up at the dock beside the overnighters, ranging from small cabin cruisers to sailboats to a few yachts.

Signed trails guided us through the woods to the base of Chatterbox Falls. At the trailhead, another sign tried to dissuade us from hiking the rugged trail up to the trapper's cabin (photo fail, so copy below), without telling us NOT to go.

So we charged on up.

And it was indeed rough, very steep, hard to follow, and at times a mat of roots or just rock we had to scramble over. I didn't take photos because I was using my hands so much just to get up the trail. In 1.6 miles and just under 2 hours, we came to the collapsed old cabin beside a waterfall cascading over blocks of granite. 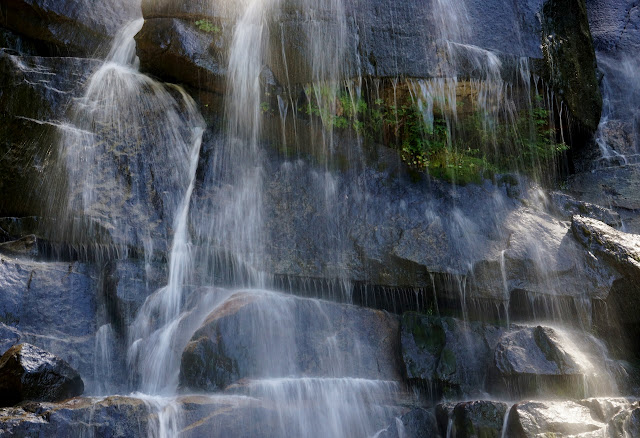 And the view back down to the inlet 1,700 feet below wasn't bad either (see the shot at the top of this post).

While getting down was faster than going up, it wasn't particularly easier. My right toe got numb and painful from the steep declines (some of which were negotiated by sliding down on my bum).

We both decided to take a swim to cool off back at the cove in an aqua blue-green lagoon between some small islets. I had to be careful to avoid cutting my feet on the many barnacle-encrusted oyster and mussels shells blanketing the surface below.

Slipping into the cool but not too cold saltwater was wonderfully refreshing. Unfortunately I couldn't stay in very long because of leg cramps.

Our second night there, we both slept outside on deck to stargaze and hopefully see more shooting stars (the Perseid meteor shower was peaking a few days later). 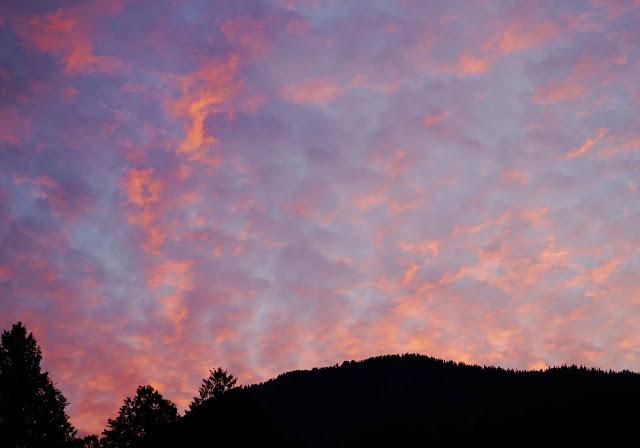 As I lay on my back tucked cozy in my sleeping bag, the steep mountains encircling us close by felt like comfort. With the zillions of stars and gossamer Milky Way overhead and the soft summer evening air, it was a peak experience. In one of those seared-in-my-mind moments, I thought to myself: If my big toe didn't hurt, this would be bliss.

Despite the aching toe, it was blissful. I saw a half dozen meteors streak across the night sky in blazes of white before drifting off to sleep a very happy camper.

Happy trails and thanks for visiting Pacific Northwest Seasons!

Check back for the next and last post in this series: Our return back down the inlets, with an overnight at another beautiful marine park on Malaspina Strait.

In between blog posts, visit Pacific NW Seasons on FaceBook, Twitter, and Instagram for more Northwest photos and outdoors news.
When You Go
Late July/early-mid August is peak season for boating up into the BC coast inlets, with the mildest weather. I'm told if you go to Princess Louisa Inlet earlier in the season or happen to be there right after a heavy rain, you'll see more waterfalls. I was on a friend's sailboat, but there are numerous tour operators who take charter boats up for the day to Princess Louisa.

Keep on keeping' on.