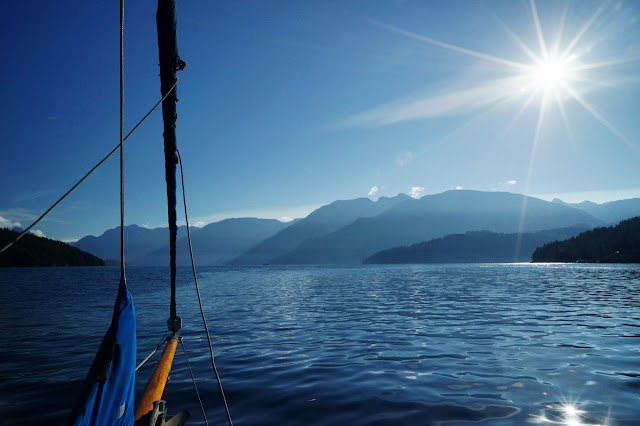 This is the first of three posts about a recent trip on a sailboat along the Sunshine Coast north of Vancouver, British Columbia. Read the second post here and the third post here.

When my friend Mark invited friends and family to join him during a six-week sailing sabbatical in the Salish Sea, I jumped at the chance—a bucket list opportunity must be seized.

We decided I would join him at Pender Harbour on the Sunshine Coast north of Vancouver, B.C., and sail up into Princess Louisa Inlet, which several people had told Mark was a must-see. It's the deepest fjord in BC and sounded like a perfect destination.

On a Friday morning, I left Seattle around 6:30 a.m. and breezed through the border crossing just east of Blaine, Washington, with absolutely no waiting line. This is rare along the I-5 corridor.

After taking the ferry from Horseshoe Bay across Howe Sound, it was a scenic drive up the increasingly developed but still relatively rural Sunshine Coast (Highway 101). By mid-afternoon I arrived at John Henry's Resort & Marina on Hospital Bay in Pender Harbour and was immediately charmed by this cozy and picturesque little cove. 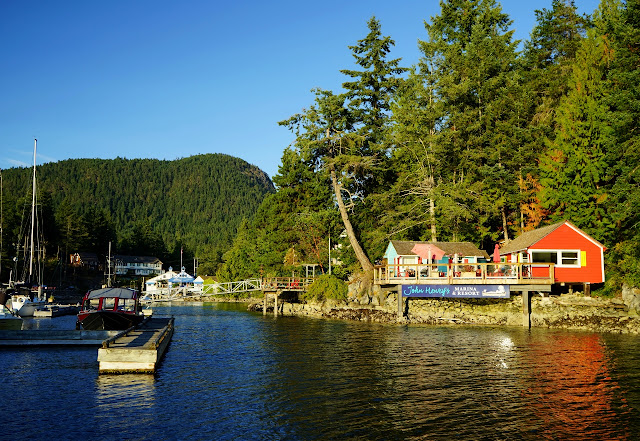 It didn't take me long to find Mark. After three weeks of sailing/cruising already, he looked tanned and relaxed. I found myself unwinding pretty quickly too.

Dinner at Cafe at John Henry's (attached to the marina's grocery store/gift shop) was excellent. Beforehand we started with (nonalcoholic) drinks on the deck. My glass of iced chamomile tea, which is generally a pretty bland drink, was artfully crafted by the bartender with a lemon twist and a hint of pink.

My first night on the boat I was quickly lulled to sleep by the gentle rocking on the water. Both Mark and I awoke just before the alarm was set to go off at 5 a.m. An early start was the plan for our long journey (48 miles) up Jervis Inlet to Princess Louisa Inlet.

I love the promise of early morning, when the new day is slowly emerging. I also love going places I've never been before. By 6:15 we set off motoring towards the Malaspina Strait with anticipation for the day ahead. 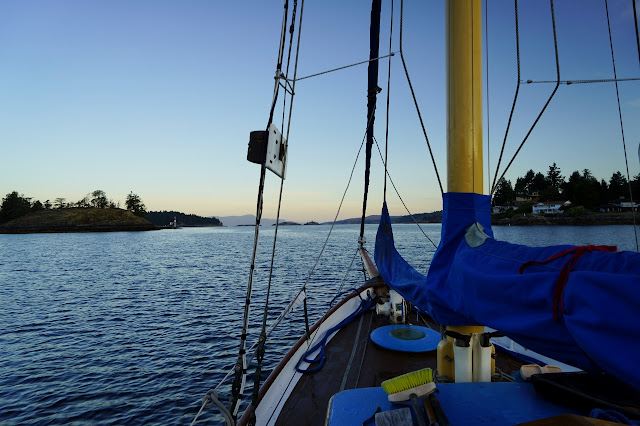 For you sailors, we were traveling on Mark's ~ 40-foot-long wooden sailboat Aeolus, which was built in the 1930s. It's a lovely old boat—not fancy but equipped with a modern electronic navigation system.

After we cleared Pender Harbour, Aeolus made a U-turn into Agamemnon Channel en route to Jervis Inlet. While the sun had already risen, it hadn't fully crested many of the hills and ridges, so we passed in and out of shade for a while. 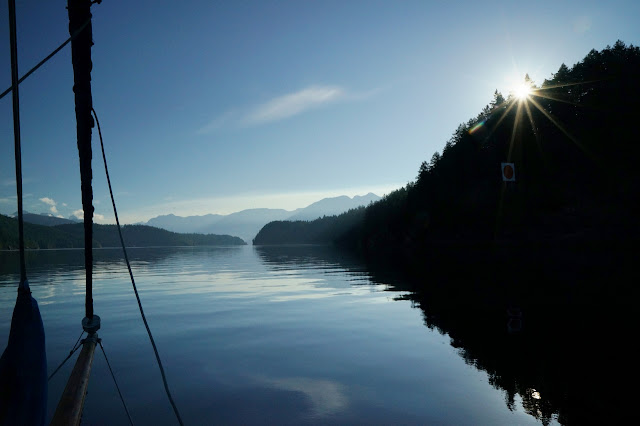 Ahead, jagged peaks of the 800-mile-long Coast Range of BC looked dramatic on the distant skyline. Later in the day we were on the other side of that pointy peak in the middle of the photo below. 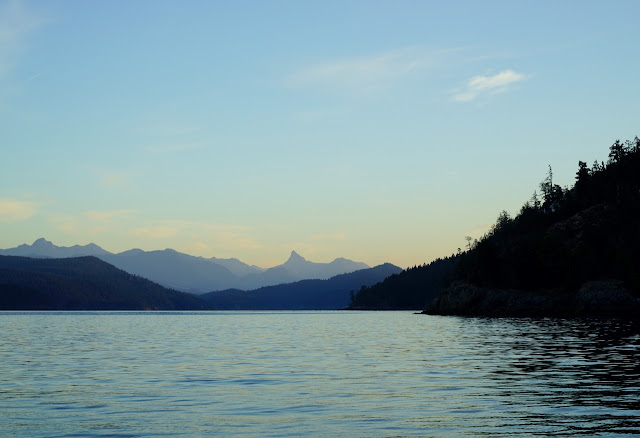 An hour or so into our cruise, a BC ferry passed in front of us where we merged into Jervis Inlet. Years ago I took that ferry heading southbound, and I remember being thrilled at the juxtaposition of mountains and sea together.

Dead ahead at the northern end of the first long reach (Prince of Wales) were some impressively craggy peaks. On the left are the Marlborough Heights, and the pointed peak on the right is Mt. Churchill. With stunning high granite walls, these are a destination for climbers. 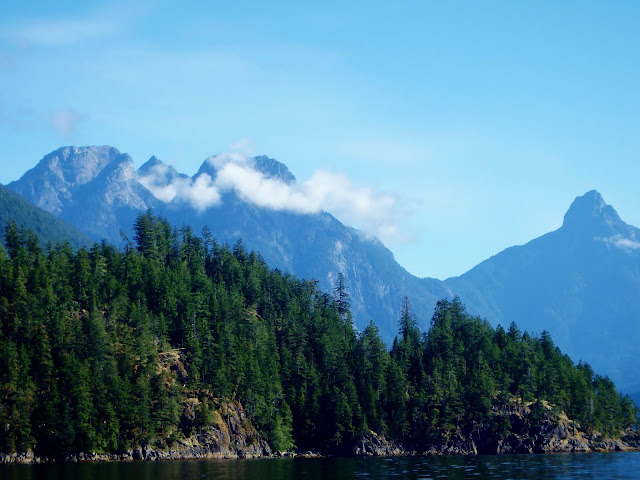 And so we continued past mountainsides blanketed in evergreen forests, evidence of past clearcuts very visible in places. We curved around the Marlborough Heights into the Princess Royal Reach, the longest reach.

Midday we crossed over to the western side of the reach to see a pictograph painted on a rockface about 20 feet above the tideline. Apparently there are many along the inlet and nearby channels. Centuries before loggers, trappers, and boaters began flocking to this area, the Sechelt Indian Band (shíshálh Nation) called these waters their home. 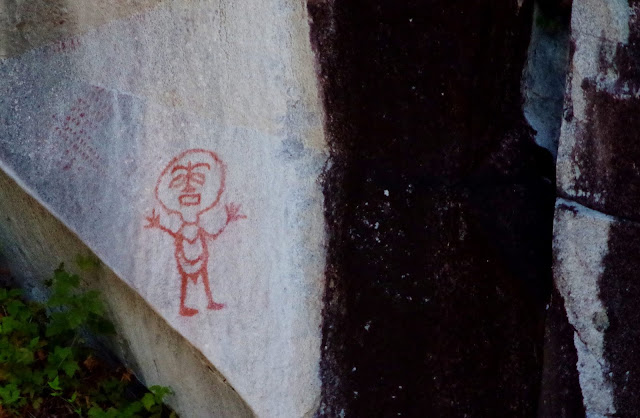 With the wind picking up and plenty of time to reach our destination, Mark decided to try sailing with the jib (front) and mizzen (back) sails. It was an especially peaceful 4 hours with just the sound of wind catching in the sails and light waves slapping against the hull. 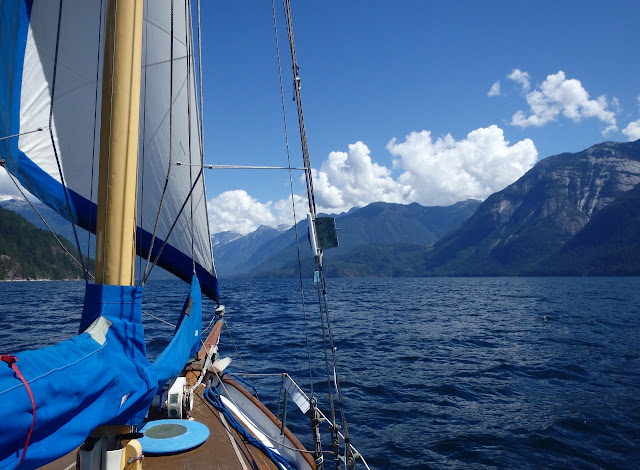 "This ship is rat-infested." I turned around quickly to see Mark holding up two cute stuffed rats. I think his daughter Lena had something to do with these little guys. The skipper is not without humor. :) 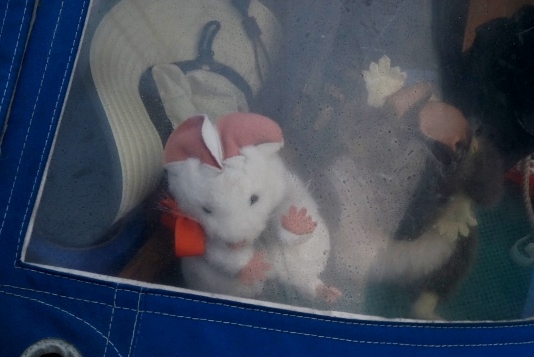 One thing that struck me as we cruised past rugged high peaks is how evident it is that their glaciers have receded. It's obvious where they used to extend farther downslope. When I've traveled around the Coast Range in years past, the glaciers were much more prominent. It's hard to observe this change because the overall health of the mountain and coastal ecosystem is partially dependent on seasonal glacial melt. 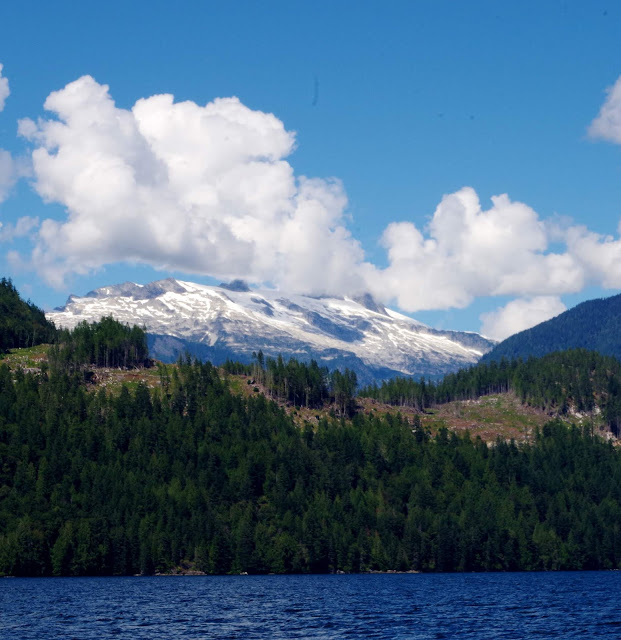 Mark timed our arrival at the entrance to Princess Louisa Inlet to coincide with slack tide around 5:45 p.m. Water can run so fast through the very narrow entrance that British Captain George Vancouver's expedition here in the 1790s noted this as a river running into Jervis Inlet instead of an entrance into another inlet.

Aeolus passed easily through the gap, past the Malibu compound (a longtime Young Life camp for teenagers). And then we entered what felt and looked like an enchanted cathedral of mountains and sea...

Check back for the next post about Princess Louisa Inlet. (Too many photos to cram into one post.)

Happy trails and thanks for visiting Pacific Northwest Seasons!

In between blog posts, visit Pacific NW Seasons on FaceBook, Twitter, and Instagram for more Northwest photos and outdoors news.
When You Go
Late July/early-mid August is peak season for boating along the Sunshine Coast and up into the inlets, with the mildest weather. While I was on a private boat, there are many tours and groups that take people up this way. Thankfully no big cruise ships yet (I don't think).

Oh Jill, this took me back to years sailing the big blue—I’ve been thinking about our next adventure—maybe a sail around the San Juan’s or up further north. I miss sleeping to the gentle rocking a lulling lapping...
Thanks , my friend,
Well written!
Hugs
C

Beautiful pictures and description, Jill. I'll look forward to your next installment.

Wonderful post, great writing and photos. Looking forward to the next one. Wonderful adventure. Smoke combined with heat to make Seattle a less than lovely place to be. We live in three places and Seattle is the one with no airco. Loved the more gentle summers that we used to enjoy. But the heat is producing a robust farm garden and signs point toward a large walnut crop. Love that you are off adventuring- more please, mary lou

Carol,
I'm happy this post brought back sweet memories for you. Hope you get to sail around the SJI. Hugs back at you!

Lisa,
Thanks! Always take a ton of photos to get a few good ones. :)

Mary Lou,
Thank you! Yes, the smoke, sigh. Heavy this morning on my walk to tea. Hope to make it down for walnuts this year. Yes, more to come!

What a beautiful place. We've been looking for a place to go in BC where I can write and my husband can fish and you just gave me some great ideas. Thank you!

Nicola, Thanks so much for the comment. I'm glad I've given you some inspiration/ideas for a BC trip. Fishing used to be better in years past, but still lovely regardless. Hope you get on up there and have a great trip!