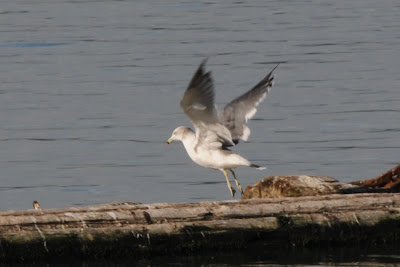 “It’s not always this easy,” laughs Ian Paulsen, nature blogger and avid Bainbridge Island birder. We just pulled off of Marine View Drive to the Dick Gilmur Restoration Shoreline and Kayak Launch along Commencement Bay, and there it is.

Napping on a log boom about 50 yards offshore with the local seagulls is a “mega-rare” bird in Washington state: a black-tailed gull that strayed a tad too far from home, which is Japan or somewhere else in East Asia. 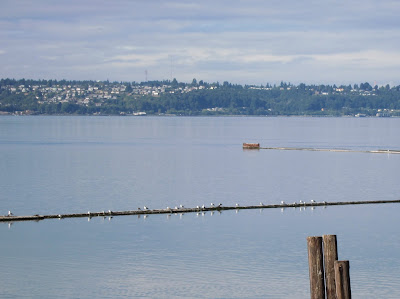 Seattle birder Kevin Aanerud, who graciously let me use the photo above he took of the rare gull, has a spotting scope set up at the park and aimed right at the gull. “Have a look, it’s sleeping right now.” 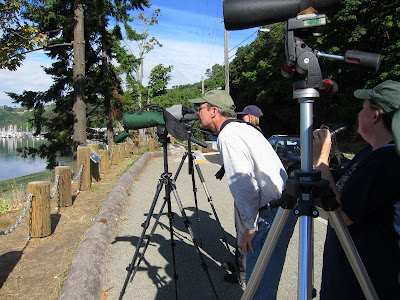 My sister Vic and I take turns peeking through the big lense on a tripod. I have to admit, for a seagull it’s cute, with a black tail the curls up at the end like an apostrophe. For these hardcore birders, though, it’s not about cute. It’s about spotting rare and unusual birds to add to their life list.

A few other people show up while we’re here. Word has spread fast among the Puget Sound area birding community that the rare gull has been hanging out here in Tacoma for the last week. 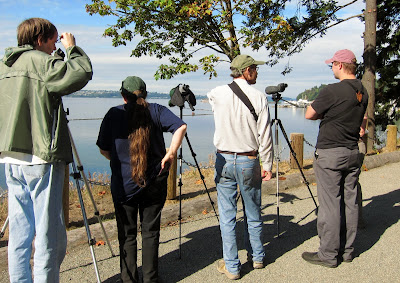 Armed with expensive binoculars, fancy spotting scopes, and cameras with lenses the size of an elephant’s trunk, the birders are a friendly, nonchalant bunch.

Suddenly nonchalant morphs, and a frisson of excitement grips the group. “It’s woken up and standing now!” cries someone. Now everyone can get a better view of the gulls’ distinguishing marks, like the red on the tip of its beak.

While it’s cool to see such a rare bird here, the momentousness of the occasion is probably lost on me since I’m not really a birder. I’m just enjoying the beautiful warm morning, the many seals popping their heads up above the blue water surface, the black cormorant shaking a struggling salmon in its long thin beak. 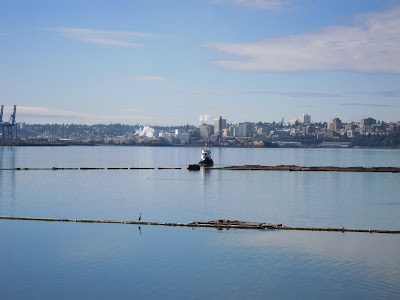 Since we’re on a tight schedule, after observing the black-tailed gull for a while we head north to stop by Dash Point State Park and check out the Bonaparte's gulls. This scenic park on Puget Sound has a broad stretch of beach at the bottom of a forested gulch. 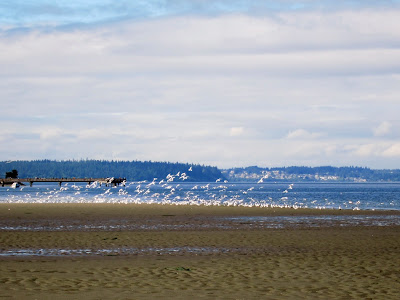 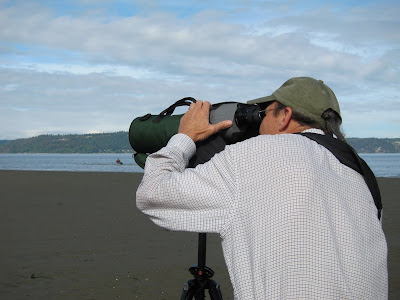 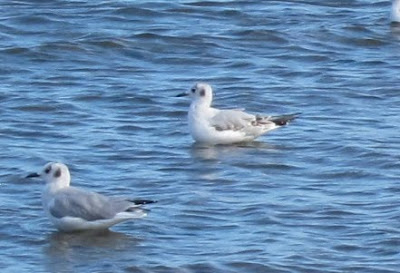 I really wish we could just stay here all day, squishing our toes in the sand and finding sand dollars and other shells. 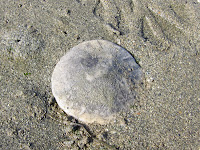 We saw the black-tailed gull from the Dick Gilmur Viewpoint and Kayak Launch on Commencement Bay. Dash Point State Park is off SR 509 a couple miles north of Brown’s Point.
Posted by jill

aw, it looks like it was a splendid day! your story and photographs make me homesick!

ID'ing gulls is so hard. I wouldn't even know that it was rare!

Thanks GrrlScientist! You a Northwesterner living in the U.K.? I did time there as a student. Cool shots on the Guardian.

Mike, yes, they all look the same to me at first glance.