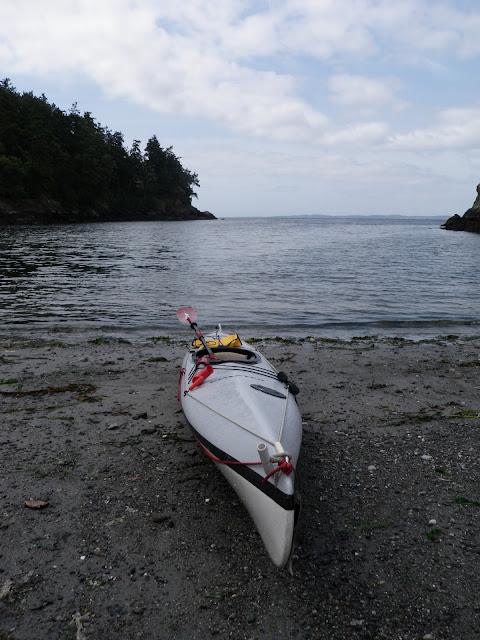 Before the sun rises I'm awake, fidgety and excited to paddle once again in the San Juan Islands. With a banana and Clif bars stashed in the car for breakfast, I'm on the road early from Friday Harbor. My goal is to get on the water before the winds pick up.

When I arrive at Smallpox Bay in San Juan County Park a bit after 7 o'clock this cool May morning, a southwesterly breeze is already causing the big American flag at the park office to dance and flap. But no one else is here yet.

Thankfully, no whitecaps are forming on the small bay and in Haro Strait beyond, so I park and start hauling my Mariner Coaster kayak and gear down to the beach.

Here on the western side of San Juan Island, separated from Vancouver Island by the long sweep of Haro Strait, resident orca whales can sometimes be seen passing through or even feeding close to shore. I'm hoping I'll be lucky enough to spot orcas today from my kayak.

After launching from the beach, I paddle out to open water and then steer southward toward Lime Kiln Point State Park a few miles away. So far the sun hasn't risen high enough to clear the rocky shoreline of shadows, so I stray far enough off shore to catch the morning sun. 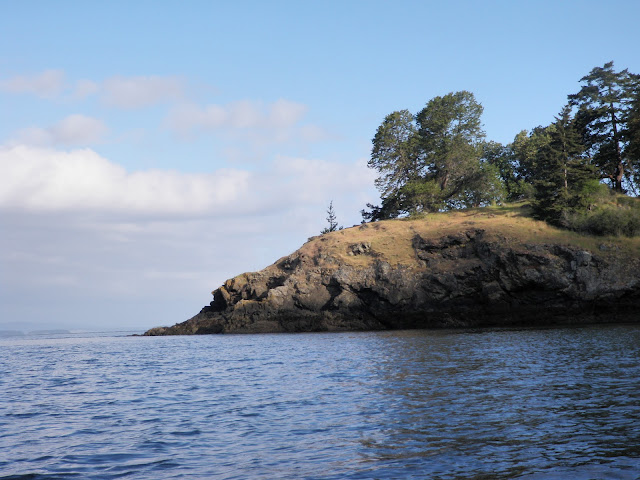 When I pass the historic lighthouse at Lime Kiln Point, I swing out even farther offshore to avoid getting tangled in the lines of several guys fishing in this bottomfish preserve. 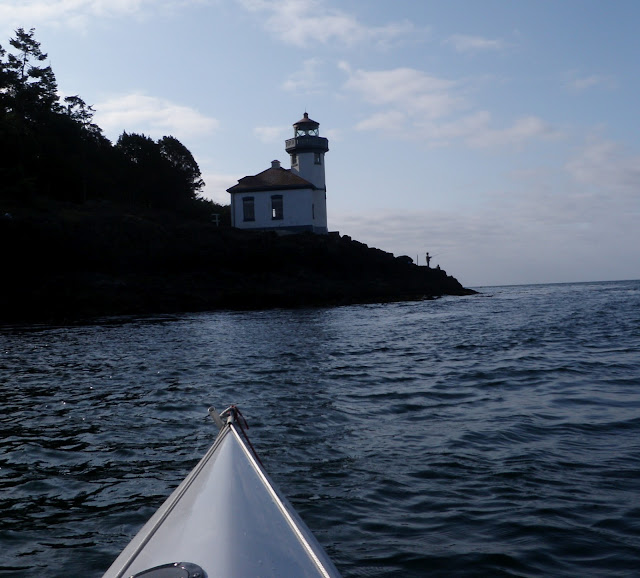 Just before I reach the point, a big bald eagle glides straight overhead. A kayak guide I met the day before said there are a couple active eagle nests along this stretch of shoreline.

After paddling hard for 90 minutes while scanning the sea for signs of orca, I decide to slow down and start exploring the shoreline instead. While the orcas continue to elude me, I never tire of spotting seals, sea stars, and waterfowl.

First, though, I just let myself hang in the water and drift for a few minutes in the protected water behind the rocky outcrops of Pile Point.  When I round the point close to the rocks, a smallish gray seal less than 10 feet away slips into the water with a splash. 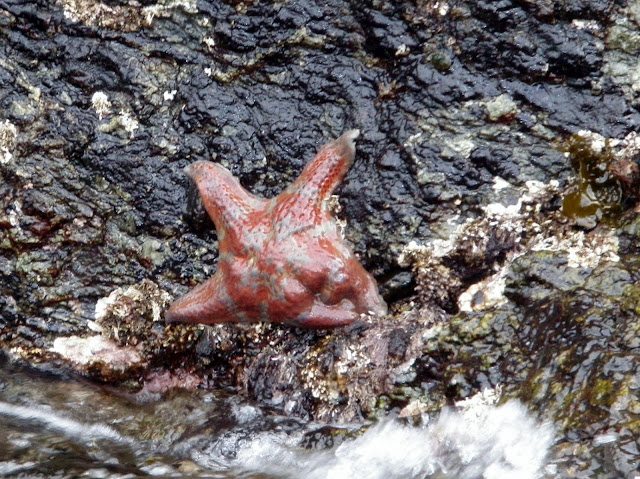 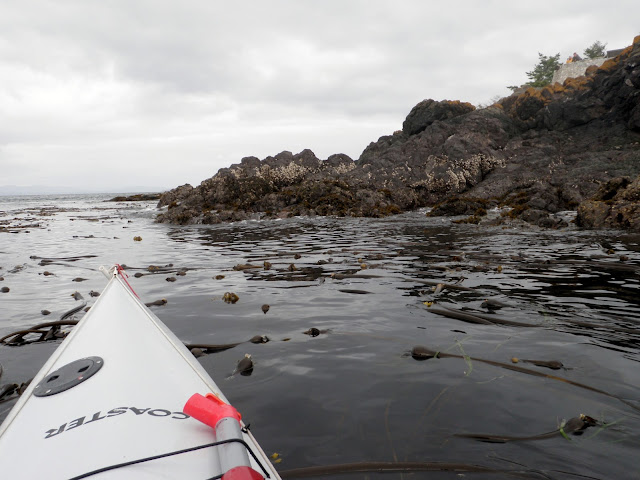 With strong tidal exchanges and huge volumes of Salish Sea water flooding and ebbing through Haro Strait, the San Juan Islands shorelines are rich with sea life. I skirt around kelp forests and eelgrass beds, some of the most productive ecosystems on the planet. 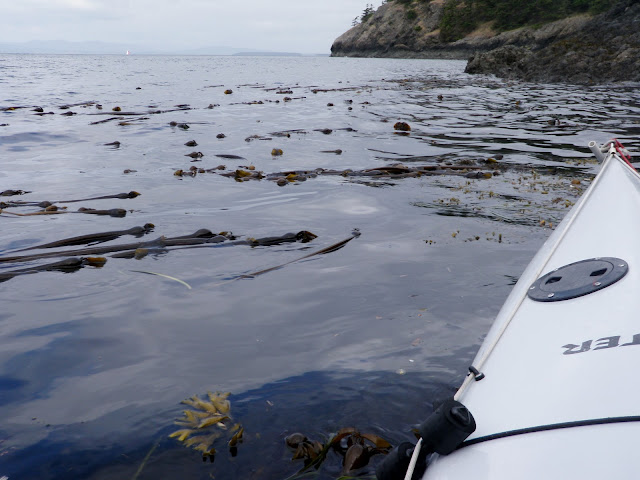 Kelp are also a great way to gauge the tidal currents. As I turn around to kayak back north, the long bull kelp strands are all pointed due south, indicating a strong ebbing current. (A reminder to myself and all you kayakers out there - remember to check the tide tables before heading out on any kayak outing in the Salish Sea.) With the wind now at my back, the currents are flowing in the opposite direction, which makes for some choppy, squirrely water around the points I pass heading back north.


As I round a point while hugging the shoreline below a rocky bluff north of Lime Kiln, the oncoming current is so strong that I can't make any headway despite paddling as hard as I can.  Time to retreat.  I paddle back to a protected cove and wait 30 minutes. When I see another kayaker coming from the north, I try again, farther away from shore this time. 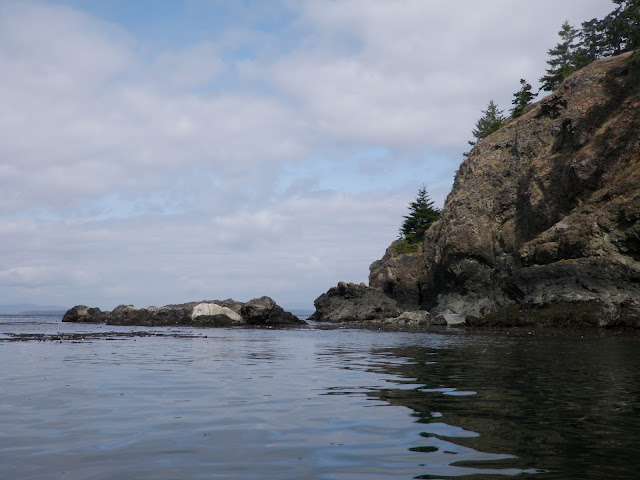 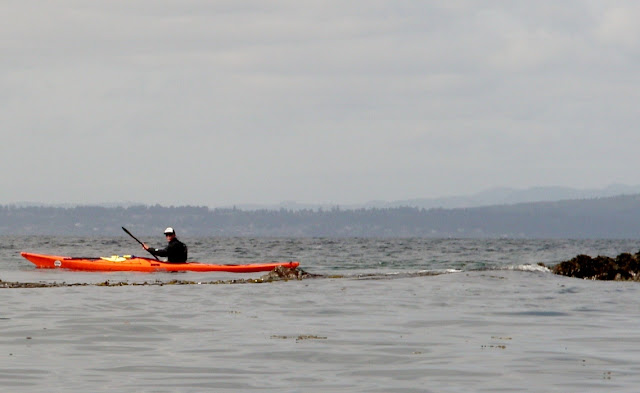 Next time I make it by surfing some big waves from the wind at my back. 'Twas a little scary exciting.

Four hours after I started, I glide back into the calm water of Smallpox Bay. Numerous kayak tour groups are now heading out for half-day paddles. This is the most popular put-in spot on the island for kayakers because of the nice public beach launch in the protected, scenic little bay. 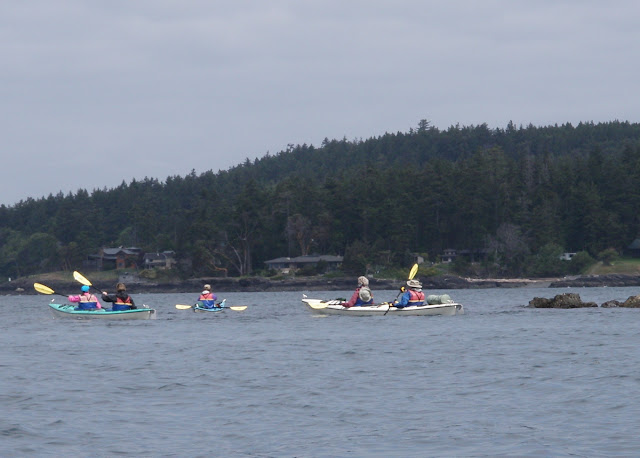 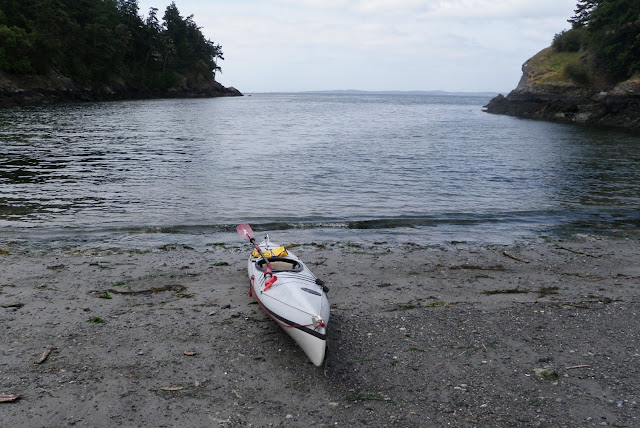 So I didn't see any orcas, but a big seal did roll over on its back and scratch its belly as I glided past (just for me, of course :).  And whales or not, by my reckoning, not much beats four hours of breathing fresh sea-kissed air while kayaking in the San Juan Islands.

So have you had the thrill of seeing orcas while you were out kayaking? Or something else equally exciting?  Let us know with a comment below. Thanks!

When You Go
Numerous outfitters offer kayak tours out of Smallpox Bay, with some tours heading north and others heading south.  Discovery Sea Kayaks, San Juan Outfitters, and Outdoor Odysseys are few that offer guided tours for beginners as well as seasoned kayakers. If you're on your own, be sure and check the tides/currents for the day.

Got to be the most beautiful way to get serious exercise! Hopefully the orcas will surface next time.

Great post, Jill! I’m glad you linked to an explanation of Smallpox Bay – heartbreaking though it was. The quote from Capt Vancouver had such a poignant innocence to it, didn’t it? He had no idea of what had caused the massive death in the native population. Very striking reading.

Cool pictures and a lovely description of a lovely morning.

Love your photos! Thank you for sharing your adventures with your readers. It’s really appreciated!

My orca experience in the San Juans was mid-80's on a vintage 54-foot Chris Craft. We were cruising in an open stretch of water and saw some orcas probably 1/2 mile away. We decided to cut the engine and watch. To our amazement, the pod (maybe 15 total?) headed in our direction, swimming at surface level. As they approached our boat, the pod split and about half swam around our bow and the others around the stern. All was quiet except the gentle sound of the orcas cutting through the water. It was truly breathtaking, as they were maybe 10feet away from where we stood on deck.

Les! Thanks for the comment. You know, I remember when that happened and hearing about it right afterwards! I sort of expected to experience the same myself some day, but not so far. What a wonderful experience you had that day.

I could smell the salt water and feel a few splashes from the paddle but glad I did not have an energy bar for breakfast. Next time take a bit a kelp are but it on bagel and cream cheese. Keep on doing it Jill.

Beautiful. What a great adventure! 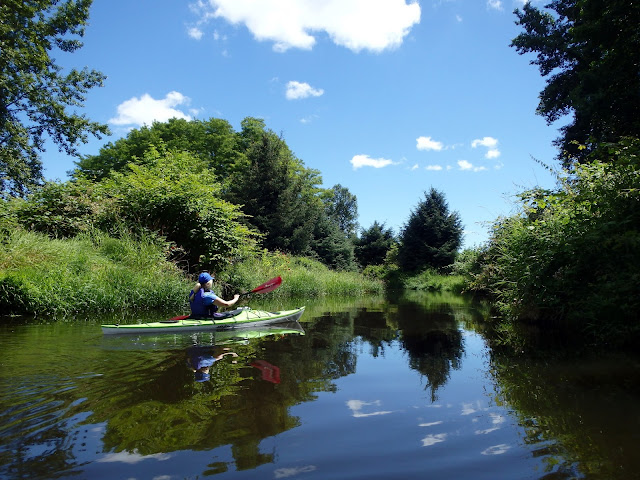