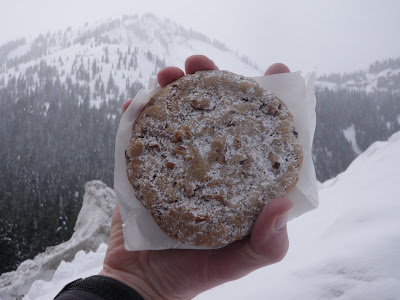 Have you ever had an unforgettably delicious cookie that made you ignore common sense and turn into a raving cookie monster?

I discovered that special cookie at, of all places, an out-of-the-way, postage-stamp-sized deli tucked in the back of a pub at a downhill ski area.

Crystal Mountain skiers who’ve made it past the bar and snarfed down Snorting Elk Deli’s amazing cookies instead of (or in addition to) beer and pizza know what I’m talking about. Maybe your favorite is the chocolate espresso or another Snorting Elk cookie since they’re all so tasty…but my cookie fixation is the crocodile spice.

David, a friendly twenty something who works in the deli, doesn’t know exactly who came up with the recipe or how long they’ve been around. When I tell him I remember crocodile spice cookies from my years as a ski instructor at Crystal in the early 1990s, he says “Wow, I was only three years old then!” (Ah, nothing like being reminded that you are not a youngster anymore.) 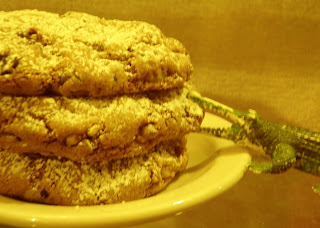 What I do know is that these cookies are unique to Snorting Elk. “You can’t get these cookies anywhere else,” David tells me. (Indeed, I did a Google search for crocodile spice and got no hits.)

So what makes crocodile spice cookies so wonderful? Think of the perfect chewy-yet-crisp chocolate chip cookie, then throw in strong hints of cinnamon and ginger, toasted walnuts, and a generous sprinkling of powdered sugar.

Sounds simple, huh? But it’s a brilliant combination, in my seasoned cookie-loving opinion. I’d call it an exotic-rustic treasure of a cookie.

When I ask David if they’ll give up the recipe, I get the answer I expected: “No.”

Silly me. But at least he’s nice about it.

“The recipe has evolved over the years.” He tells me Lindsey the baker starts at 4 a.m. every morning during the ski season making cookies and other goodies in the Snorting Elk kitchen. I’d personally like to thank Lindsey for doing a superb job! 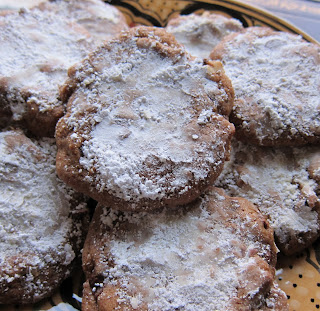 Of course I just have to see if I can replicate the crocodile spice in my kitchen. I start with a modified Tollhouse recipe, but make numerous tweaks.

The results? Not bad. Not the real deal, but close enough to try if you can’t make it to Crystal in the next few weeks. I think I overdid it a little on the spices, so I’m reducing the amount a teeny bit here. This makes about two dozen cookies, depending on how big you like them. 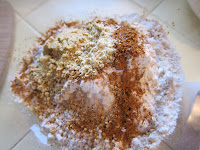 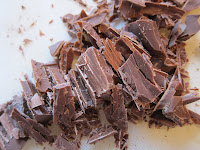 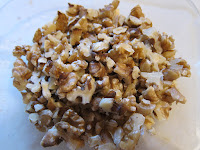 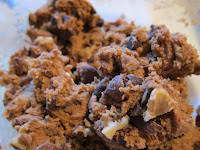 Bake for 8 minutes in preheated oven at 350 degrees.

After cooling for a few minutes on a rack, spoon some powdered sugar atop each cookie and smear across the top. 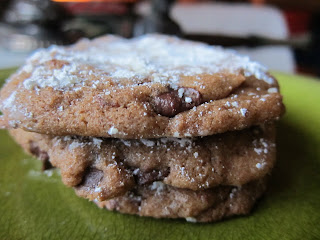 David says Snorting Elk Deli will only for sure be offering their cookies through the regular downhill ski season ending April 17 this year, although they might extend into late-season spring skiing, which starts in late April and goes into early June.

To find Snorting Elk Deli, cross the wooden bridge just below the base lodge complex on the south side of the upper parking lot and follow the footprints in the snow to the bar entrance. Inside, go left past the first few booths, then right and walk past the fireplace straight to the back, where you’ll see the deli entrance. If you want to get a cookie, go early! Cookies go on sale at 11 a.m. and usually sell out by mid-afternoon. BTW, Snorting Elk Deli has great soups and sandwiches too.
Posted by jill

I remember those cookies! Yes - they are the best. One more reason to go back to Crystal!

I only remember the beer from years of after ski visits to the Snorting Elk. Cookies and beer? Hmmm. not sure about that.

All the cookies at this little Deli are incredible! The Peanut Butter Chocolate chunk are my Favorite!!!!

Sharia, you need to try them! I'll save one for you...

Thanks Mary! I'll save one for you too...

Mab, take the cookie over the beer next time! Or get a cookie and save it for later.

Eric, I almost got one of those PB cookies last weekend, next time!

Do you ship to Wenatchee???? They sound and look de-lish!

oh YUM! and the originals are baked by LINDSEY!!

I am a lousy skier, but a great cookie-eater. Thanks for the recipe (and love the mock croc name0!

I love the Snorting Elk Crocodile Spice cookies. They've been around for as long as I can remember, and every once in a while I let myself have one. As a special treat. I'm diabetic, so I really shouldn't, but these are one cookie that I just can't resist. While reading your post, I skipped over the recipe so as not to be tempted with making these at home. Okay, so I glanced at the recipe. Just brushed my eyes past a few of the ingredients. But I did bookmark this page, is that so bad? I figure when I'm craving a croc spice I can just check out this post and maybe I won't crave it anymore. Wishful thinking? Perhaps. But it's my story and I'm sticking with it.

Crocodile recipe online from the Star-Tribune is

Crocodile recipe online from the December 3, 2008 Twin Cities Star-Tribune is

hey Meagan, wow, very interesting! wonder if they got their recipe from Snorting Elk? Or if this is a longer-term, word-of-mouth recipe that has been around for several decades?