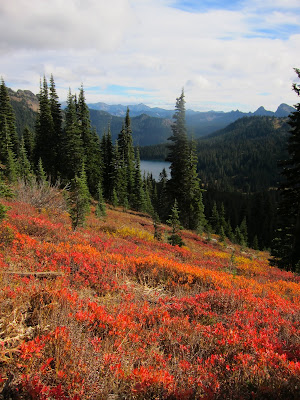 If you time it just right between storms and the first big snows, late October is a spectacular time to hike and explore the Cascades and east of the mountains. This is the first of several posts on my fall road trip to southeast Washington, northeast Oregon, and a teeny bit of Idaho. And just two days after I did this hike, the first big snowstorm hit the Cascades. Close, huh?

As we’re driving east on Highway 410 (Chinook Scenic Byway) on the northern edge of Mount Rainier National Park, the two-lane road climbs and switchbacks up and up to increasingly magnificent views of surrounding peaks and autumn colors. “Ohmygosh, can you believe that big patch of red?” I yelp, pointing to a brilliant slash of scarlet foliage on the slopes above.

Just before we arrive at Chinook Pass, the sun comes out. I can tell this is the beginning of a great autumn road trip. 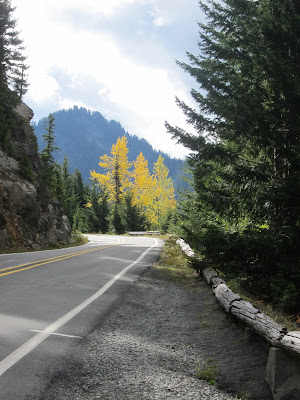 It’s a perfect day to hike the 3-mile Naches Peak Loop, one of the region’s most popular hikes. (Of course, I’d say every day is a perfect day to hike unless it’s cold and raining or snowing.) On a nice summer weekend, this relatively easy trail with splendid views can get too crowded for my taste. But this late in the season and on a weekday, there’s not many others out here.

Usually I’d say hike this loop counterclockwise to get the best shots of Rainier, but today she’s obscured by clouds. We park at the Tipsoo Lake lot (where my Yakima relatives used to meet us Coasters for family picnics) and cross the road over to the trailhead.

We begin climbing up a pretty mild grade, in and out of forest, until we emerge into open alpine meadows on the back side of Naches Peak away from the highway. Glowing orange, red, and gold along the trail are huckleberries and other alpine shrubs. 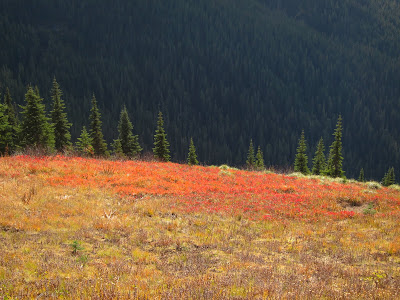 Within a mile or so, we see Dewey Lake to our right several hundred feet below in a glacial cirque, and pass a lovely clear alpine lake just to our left. To the southeast, the forested valley stretches away below us. The going is easy and the scenery is superb. 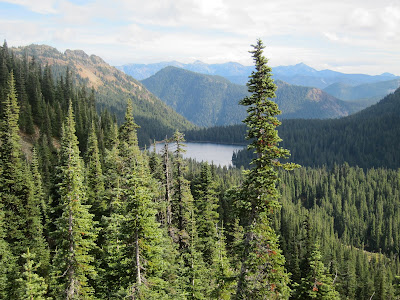 As we loop around the north side of Naches Peak another mile or so farther on, I pull on my wool cap and gloves. It’s chilly here in the shade, with crunched up ice in the muddy footprints ahead. Yes, there are lots of footprints on the trail, but we pass only a few people today.

After passing through the shady side and starting to loop back toward Chinook Pass, an enchanting alpine lake spreads below like a scene out of Shangri-La. An art director couldn’t have designed a better set to evoke oohs and ahhhs. 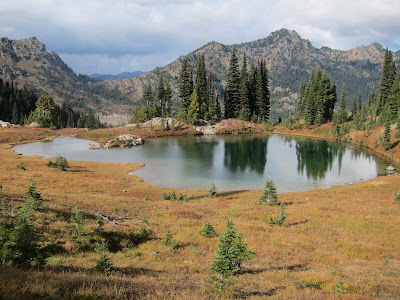 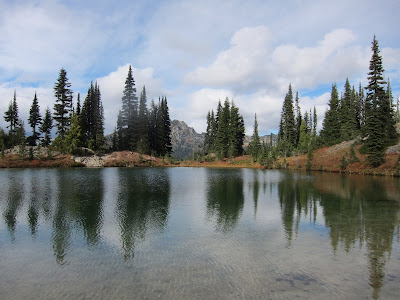 At the end of the hike, we cross the highway and descend through a short stretch of forest and come out at Tipsoo Lake and back to the car. Good hike in mountain fresh air. 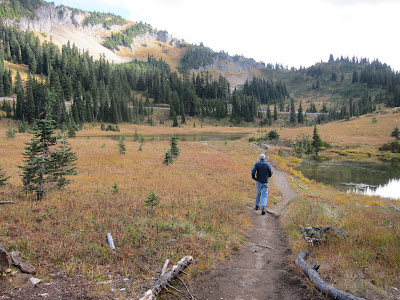 I’ve never driven the stretch of Highway 410 east from Chinook Pass to Yakima, so I’m excited to travel a new route. Within just 10 minutes of descending east down the pass, I notice the evergreen forests are sprinkled with golden trees.

New England’s fall colors are vivid (yes, I spent a few autumns there), but they’ve got nothing on the Northwest’s golden larches that light up evergreen forests like trees on fire. 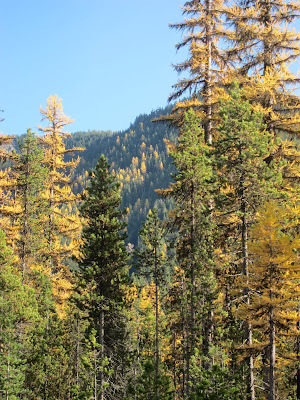 “It’s so beautiful!” I keep on saying. Western larches grow in pretty specific areas—between elevations of 2,000 to 7,000 feet on the eastern slopes of the Cascades and mountains of the Columbia Basin and southern B.C. They’re a uniquely deciduous conifer sometimes called tamarack.

As we follow the American River, then the Naches River, the fall colors and scenery continue to give us a good show. 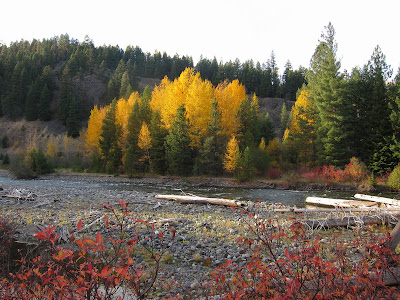 We roll into Yakima about dinner time, and find a Mexican restaurant recommended by a guy we met at a gas station a few miles out of town. I figured with the large Mexican immigrant population, Yakima would have luscious, authentic Mexican restaurants and taco trucks.

Here’s what I learned: While it’s good to get recommendations from locals, it can backfire too. 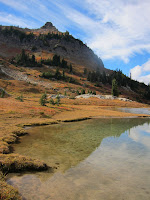 I’m sure there are decent Mexican restaurants in Yakima, but there are bad ones too, like the one where we had dinner (which shall remain nameless – I’m not about dissing anyone and affecting their business). Next time I’ll check on Yelp or Chowhound!

When You Go
The Chinook Scenic Byway begins in Enumclaw and follows the highway through two national forests and Mount Rainier National Park to US 12 in Naches. Chinook Pass is about two hours southeast of Seattle. I recommend hiking the Naches Peak loop on a weekday if at all possible.
Posted by jill

What great scenery, thanks for sharing:-)
Now I need a glass of wine:-)

Barry,
Thanks, yea, was drizzly this a.m. but nice out now! Heard that Chinook/Cayuse are closed now due to avalanche conditions, so everything pictured on my blog is covered in snow now, just 5 days later.

Bud,
Thanks for the feedback, there's more to come in a few more posts. Enjoy your glass of vino :)

I am normally not a fan of red color, but WOW those pics are amazing. people think once "fall" hits here its miserable all the time but your post proves there is still lots of beauty out there as long as you have your cap and gloves!

Great article and pics! Makes we wish I had gone with you!!

Lindsey,
Right! Don't let the chilly weather keep you inside, although now it's looking more like ski season. Thanks for feedback on the photos - yes the huckleberries were gorgeous.

Carina,
Thanks, we have to go hiking soon!

You are making me homesick again, Jill. Glad you were able to get out and capture the fall colors in their prime.
Ciao e saluti,
-Lisa

STUNNING! thanks for sharing Jill!!!!

I agree, Jill, that Naches Peak Loop is a great hike. Wonderful photos. I hiked this trail in late September -- warm and sunny, with views of The Mountain, too. Thanks for sharing your trip.
Betty

Ciao Lisa! Ah, I'm sure you can't be homesick for too long considering the splendors of Italia! Hope to make it over.

Deb, thanks but I bet it's stunning in Montana now too!

Hey Betty, glad you had a good hike on the loop with views of the Mountain. Tea soon!

Looks like it was a great trip. The larches are fantastic! I have yet to see them in their golden glory (I've only seem them green). Next year!