Mt. St. Helens National Monument: Take the Detour off I-5! 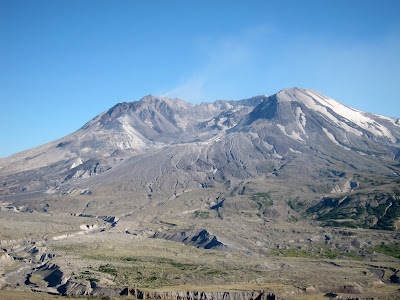 How many times have you zipped along I-5 between Portland and Seattle and noticed the signs for Mt. St. Helens National Monument…and not turned off?

Me neither. Until today.

For years I pooh-poohed the visitor center at the Johnston Ridge Observatory. Too touristy I figured. I’ve climbed to the summit from the south side and peered down into the crater (which I highly recommend), so driving to a visitor center seemed too crowded and tame.

If you want to see up close the aftermath of geologic forces that make the Pacific Northwest such a spectacularly scenic (and sometimes dangerous) place, take that exit off I-5 at Castle Rock and keep on driving. Besides awesome views and good hiking trails, the film at the visitor center has an ending more stunning than anything Hollywood could conjure. Plus there’s a bonus on the way back (keep reading…). 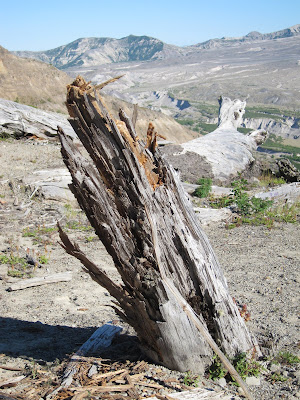 About an hour north of Portland, I turn off at 4 p.m. for the 55-mile drive to the Johnston Ridge Observatory, a bit late in the day since the center closes at 6. What I didn’t factor in was time to stop at the numerous viewpoints along the way and do much hiking. Next time I’ll go earlier with my hiking boots, pack, and water.

The Drive
While climbing gradually, the two-lane highway winds along the Toutle River valley, in and out of forest, and crosses some impressive bridges traversing gulches along the way. As you get closer, St. Helen peeks eerily above the foothills, its blown off summit a stark contrast with the forested green foothills. 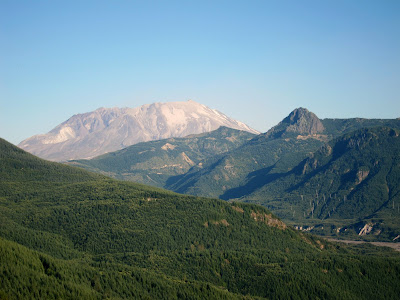 The Loowit Trail
Less than a mile from the observatory, well into the denuded blast zone, I stop to take a short hike on the Loowit Trail that circumnavigates the mountain. I don’t have time to go too far, but views of the still-smoldering volcano are amazing (note, you can enter the off-limits zone via the Loowit Trail only). 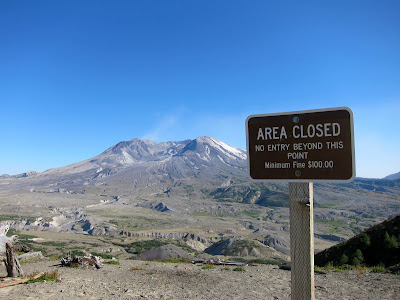 Purple lupine and bright orange Indian paintbrush are emerging alongside the remnants of splintered tree trunks, reminders of the devastating 1980 eruption. If I’d been here when the north side of the mountain collapsed and unleashed a superheated cloud of ash, I would have been quickly incinerated—a sobering thought. A little over 60 people within the blast zone lost their lives that morning, including David Johnston, the young geologist and namesake of Johnston Ridge Observatory. 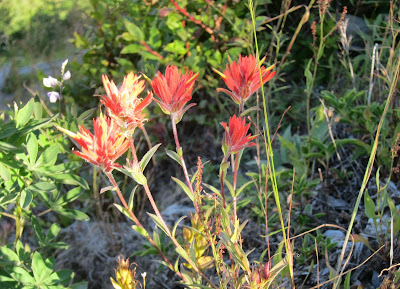 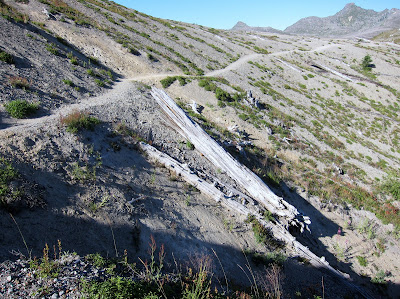 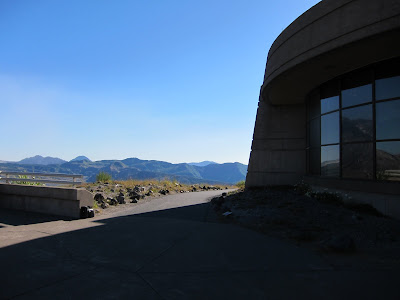 I get to the observatory just about 25 minutes before closing, which doesn’t give me much time. Over the P.A. system, they’re announcing seating for the last showing of the 16-minute film, so I scoot in and grab a seat. As the lights go out, ominous music starts playing as scenes of trees being mowed down by the pyroclastic blast fill the screen.

“Mommy, I’m scared!” says a little boy seated behind me.

It’s not all scary, but quite informative. A haunting touch is the replay of David Johnston’s last words over the radio to the U.S. Geological Survey office in Vancouver, Washington. “Vancouver! This is it!” he yelled frantically as the mountain collapsed directly in front of him.

When the film is over, but the lights are still out, we’re asked to remain seated. Curtains rise behind the raised screen, and in front of us sits the star of the show – the gaping, open maw of Mt. St. Helens just a few miles away, still puffing steam. Because we’ve just seen eruption footage, it’s a jaw-dropping moment. 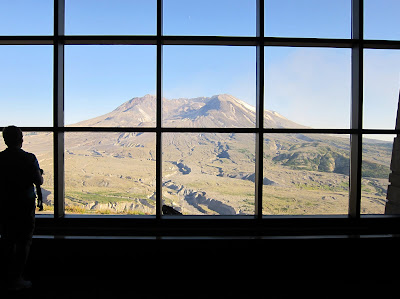 Before heading back down to the lowlands, I dash up the concrete pathway to a viewpoint above the observatory and twirl slowly around to take it all in. Thirty years after the 1980 eruption, old-growth tree trunks still lie flattened from the blast on the surrounding ridges. A bit of Mt. Adams is visible above the ridge to the east. 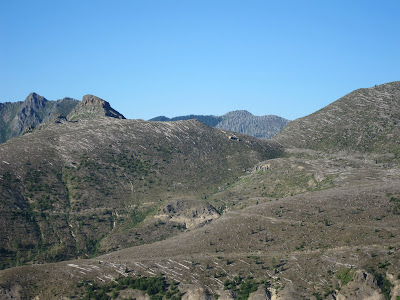 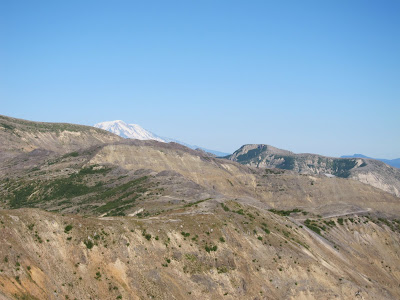 The Bonus
Earlier on the drive up, I’d noticed a sign for homemade cobbler, so of course I’m watching for it carefully as I head back down. Just around a bend as I enter Kid Valley, there it is, like a cute Grandma’s house surrounded by a tidy lawn and profuse colorful flowers. 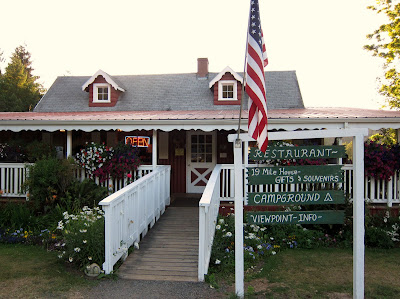 Patty’s Place at 19-Mile House sits perched above the North Fork of the Toutle River, cozy and inviting in the golden glow of a summer evening. Inside the warm wood-paneled dining room with hand carvings and Mt. St. Helens memorabilia, I grab a corner table and order a wild mountain berry cobbler a la mode with a scoop of huckleberry ice cream. Dinner.

“The huckleberry ice cream costs more, is that okay?” asks the young waitress.

I think I can handle that. As I dive into the fresh warm cobbler (before snapping a picture, sorry!), I'm happy, sharing the room with other happy people on this soft summer night. The cobbler is wonderful, tart-sweet fruit with a crispy-yet-crumbly topping. 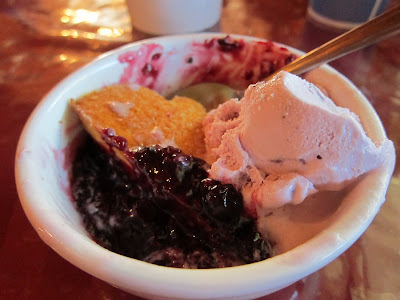 Flush with mountain fresh air and a marvelous little road trip, I flashback to family vacations when I was a kid, which were about driving around the West and taking in its grandeur. Then I head back to I-5 with a smile on my face.

There are two roads into the Mt. St. Helens National Monument. Farther north on I-5 is the turnoff to Windy Ridge, which overlooks Spirit Lake. The Johnston Observatory closes for the winter at the end of October. This year admission to the visitor center is $8 for adults. If you plan on hiking, be sure and take lots of water.
Posted by jill

Okay! This is now on the to-do list! Thanks, Jill.

So glad you decided to detour ... it is a great visit and very informative. I've been twice, both time with kids, and I get something new each time. Also have stopped on the way down at that wonderful eatery and indulged in berry pie, too ... they have interesting stories about what happened the day St. Helens blew, too. They did not hear the blast, because the sound apparently didn't "bounce" into that valley, but they began to notice the river out back going bonkers (at least that is what I remember they told us).

What a great side trip off that Seattle to Portland slog! Especially for those of us who lived here when it happened. And I'm sure the cobbler business will increase after your photos.

Well, I thought I posted here earlier, but I don't see it! Anyway, I am glad you decided to take the side trip! I've been up there twice (and also flew over it once in a small plane) and each time I learn more. Excellent job that they've done. I've also had wonderful berry pie at the same little eatery. They have interesting stories to tell about the day St. Helens blew, too.

Hey Barry, yea, I really enjoyed the trip and would go back and go more slowly to take it all in.

Vic, sorry I didn't get online to accept your comments sooner....but I'll take two! Gosh,you've only been back for 2 years and have already been twice!

Anne, thanks, I think that berry cobbler place snags a lot of the people who drive up to the observatory, it's a wonderful throwback to places I remember as a kid on road trips.

I live outside Castle Rock and earlier this summer I went on a hike at Coldwater Lake, not the loop, just one side of the lake from one end to the other. It's an awesome hike which I highly recommend. I also hiked the Plains of Abraham via Windy Ridge this past Friday. Another completely worthwhile hike. And I love 19 Mile House! Perfect post-hike meal. I've only lived in the Pacific Northwest for five years, I moved here from Los Angeles so I'm still enjoying the newness of a lot of these places. Thanks for your entries, I love seeing what else is around to explore. :)

Wow that cobbler looks AWESOME! I will definitely take Marc there. I have honestly never been to St. Helens, looking at your pictures I need to go there. What a great little trip!

HI Sasha,
sorry for the very late posting and response, but thanks for your comment and tips on additional hikes. Wow, LA to Castle Rock must be quite a change! Enjoy getting to know more of our wonderful region.
jill

Oh, how I love visiting that observatory...the ride up...the short hikes to panoramic views. One of the most memorable, besides the view of Mt St Helen's active plumes, was seeing the rather large herd of elk hunkered down along the riverbank, in the mostly denuded area. You can see them with a naked eye from several of the vantage points above, but there are mounted binoculars to get a closer look for the visually challenged. Last time we went, we took our own.

My great aunt and uncle, Elsebelle and Frank Buzzell, lived in Castle Rock most of their lives. Uncle Frank had an oil receivership near the mouth of the Toutle River. It was buried by the flow. He passed in 2002 at 88 years of age. Aunt Elsebelle was a school teacher in Castle Rock for almost 50 years. I do not have record of the year she passed.

I lived in West Richland at the time...just getting ready to open a new restaurant. The ash fell so hard in that area we could not open for a couple of months. We decided to take a road trip to make good use of the time, and drove to Castle Rock following the Columbia River Gorge. My aunt and uncle's home was at the top of the large hill in Castle Rock. Their home looked over the Toutle River Valley. We stopped to see them and took in the view of devastation from their vantage point. We saw uprooted trees and animal parts in the flow....as far as we could see.

When Dan and I were last there, it was hard to imagine the utter devastation I had once seen. What we saw was lush shrubbery, young trees, chipmunks, deer, rabbits, wildflowers galore, hummingbirds...and beautiful green meadows.