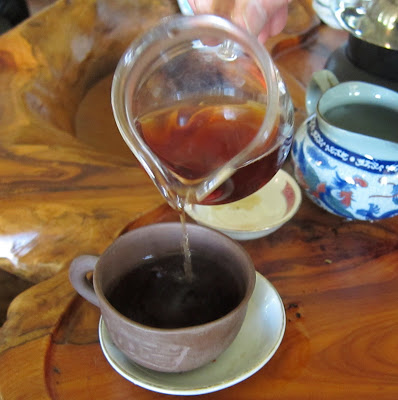 Unlike my brief stint at Bible camp where I was the only kid who didn’t cry from the spirit of Jesus (“What’s wrong with me?” I asked the counselor), I’ve been moved to tears by sipping a beautifully crafted, complex Purple Tip pu-er tea at Zen Dog Studio Teahouse in Seattle’s Crown Hill neighborhood.

Since I first blogged about Zen Dog a year and a half ago, I’ve spent many hours here, sipping tea with Zen Dog tea master Larry Murphy, trying his different teas, having great conversations. He has become a treasured friend, and he’s introduced me to others here who have also become my friends. And I bring my friends here. Call it tea love.

At first all I wanted was jasmine pearl, a refined but familiar floral green tea. Then I slowly worked through various oolongs—a richer, fermented tea—and recently settled on the Zen Dog House Roast as my new favorite tea I take home for my morning pot. (Larry roasts this oolong in his upstairs studio, which releases a heavenly aroma.) 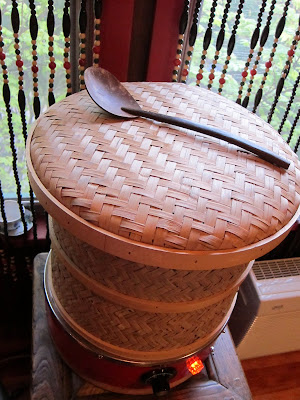 But I initially resisted pu-er (also spelled puerh), which Bon Appetit magazine called “the tea for coffee lovers” because of its rich, strong, earthy flavor compared to many teas. Never been a coffee drinker myself.

Today we’re sitting in front of Larry’s alter to tea, a shiny, smooth camphor wood table as he carefully unwraps the aged brick of tea and slices off a bit for brewing. 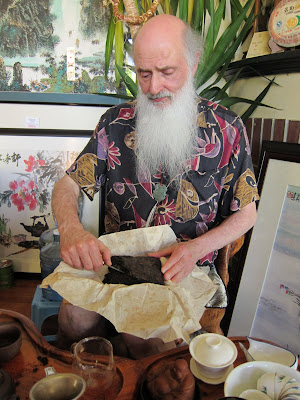 “This tea is from a 500-year-old tree in Yunnan Province,” says Larry. He gets his fine teas from small estates in southern China, where tea growing and processing is a high art. 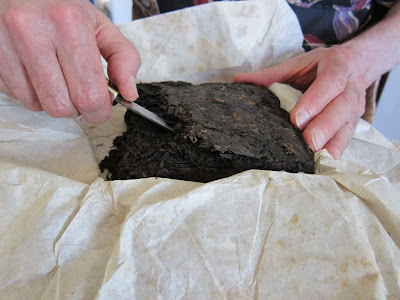 While outside it’s almost 90 degrees, inside Larry heats the pure water he’s collected from a local artesian well to a light boil. With the front door open to let in the breeze, we hear wind chimes bump against each other, ringing softly.

As we wait a moment for the tea to steep, Larry tells us “Pu-er opens the heart.” Have I perhaps been afraid of this tea unleashing my tightly held emotions?

After pouring the first brew over a fat little ceramic Buddha on the table, we sip the next deep amber brew from small brown Yixiang clay cups. When she finishes her first cup, Jillian exclaims, “What a quick hit!” 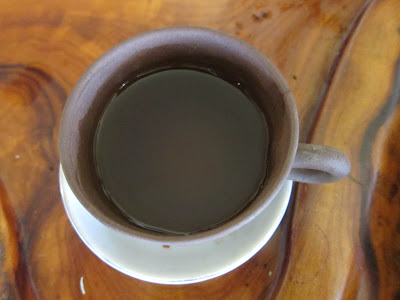 Larry leans back and smiles. “This tea is so light it almost disappears and vaporizes on the tongue. It’s effervescent, silky smooth.”

I’m just surprised that I like what I taste. The tea is light and smooth, not bitter or astringent like I’d expected. But underneath the pleasant taste lurks a mysterious, ungraspable something else. It’s of the earth, but also sunshine and rain and the sea. There’s more. I can’t pin it down.

“This is good stuff!” I say with a smile.

Pu-er is prized in China, and Americans are just starting to become aware of it. And like a fine aged wine, a premium pu-er from a wild and ancient tree that has been processed and stored well is expensive and much sought after by tea connoisseurs. People even buy pu-er as an investment.

We sip multiple brews from the same tea leaves, talking, laughing, then being quiet and noticing the sensations in our mouth and body that this tea evokes. 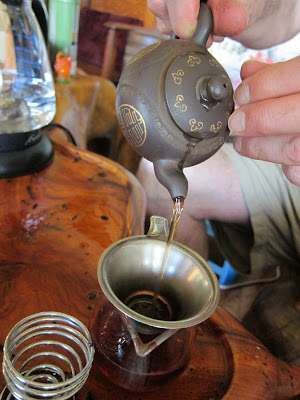 “I’m feeling a direct connection to Qi, the universal life force,” says Larry. “There’s more energy with this pu-er (a 2004 brick) than the 2007, but there’s also a deep stillness.”

I know what he means.

Jillian and I feel it in the back of our throats, and then I feel a tingling around my nose and forehead. “The third eye,” says Larry.

I consider myself a pragmatist in general, but as I’m driving home I suddenly feel a tightening in the back of my throat. Then tears start forming in my eyes. I’m not thinking about anything in particular, but I feel moved.

Is this the heart-opening from pu-er that Larry talks about?

With surprise, I realize it must be. Tea! 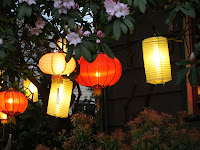 Zen Dog Studio Teahouse is on 85th Street in Crown Hill, about 6 blocks west of 15th Avenue Northwest. Look for the big Chinese lanterns hanging in the trees and bushes around the house. We drank the 2004 purple-tip pu-er. If you’re not in Seattle, you can buy Zen Dog’s tea online.
Posted by jill

This is a wonderful article and you did such a nice job describing Zen Dog Tea House, Larry and the delicious mind-elevating-heart-opening-Puer! Thank you for graciously including me in your article- I'm touched!
your puer-pal, Jillian

You have made me crave this tea, and I've never had the chance to taste it. Going online to see if I can get some down here in SoCal...

Okay, now I gotta go there soon. I remember your earlier post and promised myself I'd visit this place but (life being what it is - and my mind being what it is) haven't yet made the plunge to Ballard.

Hey Jillian,
So glad we shared this exquisite tea together! More puer!

Kathy - Great! I hope you enjoy the tea and experience some of the same "opening" I did.

Barry,
Yes, go have tea with Larry. I've met so many interesting, creative, and artistic (redundant?) people there.

Your writing and descriptions of your experience is Qi-full. Thanks, Jill. -Roy

Binary Options is the way to [url=http://www.brokersring.com/]make money[/url] securely online