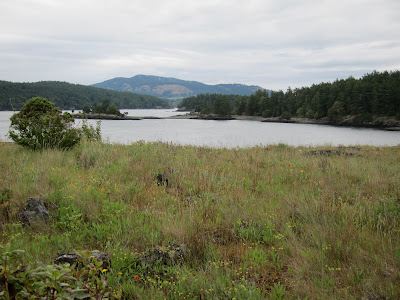 One of the many things I love about sea kayaking in Washington’s San Juan Islands is paddling past scenic little islands clustered close together. One of my favorite places for island hopping is the Wasp Islands within the greater San Juan archipelago.

Sandwiched between large San Juan Island to the southwest and Orcas to the north, the Wasps are somewhat protected from the strong currents and southerly and northerly winds that blow through the region. (Although not completely protected, of course.)

During a recent weekend trip to Orcas Island, we paddled out to Yellow Island on the western edge of the Wasp Islands. This grassy, 11-acre island is a Nature Conservancy preserve famous for its brilliant display of native wildflowers each April and May. I haven’t made it there at the peak of wildflower season yet, but over Memorial Day enough flowers were still out for a lovely display. 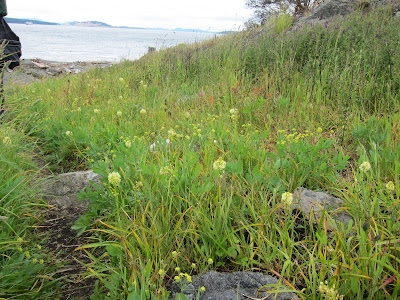 Like most of the San Juan Islands, the Wasps are rocky outcrops covered with mixed forest of conifers such as Douglas fir, deciduous trees like big-leaf maples, and evergreen madrones. However, Yellow Island is a notable exception. It’s about the only island that was never grazed by livestock, leaving the native vegetation relatively free of invasive and non-natives. Ethnobotanists believe that the local Indians periodically cleared the island with burns to promote the growth of camas root, which was an important food source.

The day we kayak to Yellow Island, pewter gray skies, a smattering of rain, and a steady wind from the west keep things interesting (but not too exciting). We take off from the marina in Deer Harbor, where for a fee you can launch and use the hose at the dock to clean up afterwards. (For a longer trip, many kayakers camp overnight at nearby Jones Island and pass through the Wasps as a side trip.)

After scooting under the dock and out beyond the marina, we paddle about 20 to 25 minutes southwest out of the harbor until we reach Reef Island, watching out for motorboat traffic as we cross North Pass. Within the reefs and rock outcrops, we seek protection from the wind. 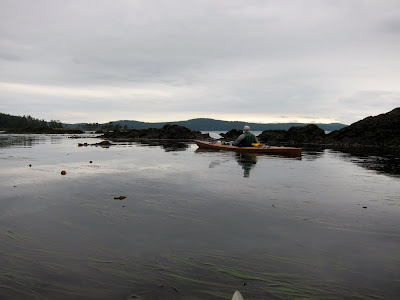 Passing along a rocky shoreline, I spy a little furry mammal scurrying up and out of sight. I think it’s a weasel, but Rich guessed wild mink. He’s right.

We stop for lunch at a beach on the west side of McConnell Island, making sure to stay below the tide line since most of the island shorelines are privately owned. As we munch, right across the passage just a quarter mile or so southwest is Yellow Island. We grab lunch now because we’ve heard food isn’t allowed on Yellow Island to prevent contaminating its fragile ecosystem. 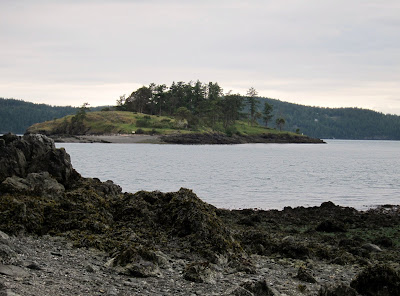 As we head to the landing beach just below the wooden cabin on the south side of the Yellow Island, a group of kayakers is leaving. Only six visitors are allowed on the island between 10 a.m. and 4 p.m. Whew! Good timing. Unfortunately the tide is out and the landing beach is nasty, full of large rocks covered with slick wet seaweed.

Within a couple minutes of our arrival, Nature Conservancy steward Phil Green comes down to greet us as we’re moving our kayaks above the waterline. He’s bundled up in a fleece parka and knit cap, binoculars hanging down the front of his chest. 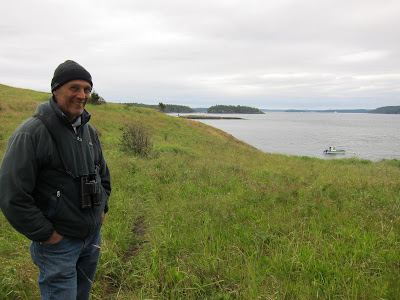 “Hi,” he says with a friendly smile. Phil’s face is pleasantly weathered with lines that crinkle around his eyes when he smiles, and a bit of gray stubble covers his chin. His demeanor is calm and relaxed. This is a man in tune with his environment. 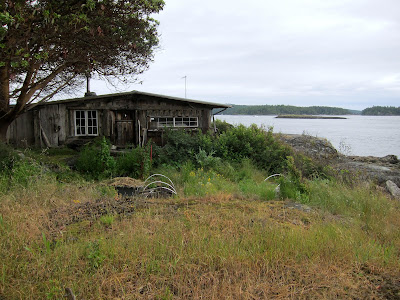 Phil lives on the island in the equally weather-worn cabin, greeting visitors and carefully observing and noting the island’s flora and fauna. He’s also a font of information. “See those flattened areas of grass?” he asks when we’re near the top of the island on the loop trail. “That’s from otters. They breed here on the island. So do the wild mink.”

We don’t want to stay too long since we see another clump of dark clouds moving toward us from the west, so we walk quickly along the trail. Bright orange Indian paintbrush, wild Nootka roses, and numerous other late blooming wildflowers are sprinkled along the trail and meadows. 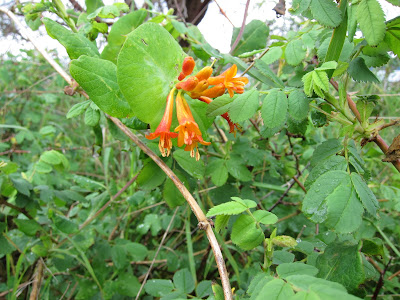 I wish we could linger longer. As we launch our kayaks back into the water, the wind has increased and we get swept quickly into the current.

Heading back, we angle east over to the Crane Island shoreline. On the north side of Crane, we’re out of the wind, and I continue to narrow Pole Pass between Crane and Orcas islands. On a map, Pole Pass is so tiny it looks like the waist of an hourglass.

It looks like an easy few strokes across the pass, but the current rips through here, squeezed by the narrow passage. We get carried back west a ways before we're completely clear of the current. 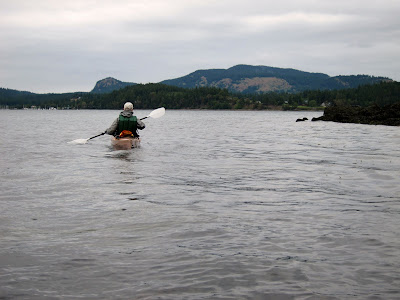 About 3 hours after we put in, we’re back at Deer Harbor. If it wasn’t windy and rainy, we would have stayed longer. But I’m happy. Any time I kayak in the San Juan Islands is a good time. 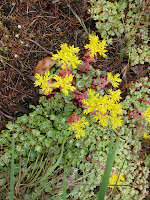 When You Go
Here is a map of the Wasp Islands, showing Yellow Island. Although the wildflowers peak in the spring, it’s still a worthwhile stop any time of year for the views and a chance to chat with Phil. Shearwater and other outfitters in the San Juans lead guided kayak trips to the Wasp Islands.
Posted by jill

Hi Jill, Just came across this in a Google search. Glad you had a good visit. i love showing off the island so visit again anytime.