Swamp Creek: Saving Salmon, One Stream at a Time 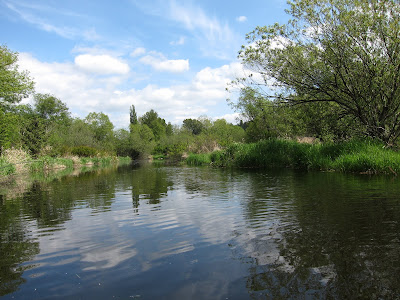 “…Salmon are among the oldest natives of the Pacific Northwest. … They are like silver threads woven deep into the fabric of the Northwest ecosystem. The decline of salmon to the brink of extinction is a clear sign of serious problems. The beautiful tapestry that the Northwesterners call home is unraveling; its silver threads are frayed and broken.”

-Jim Lichatowich from Salmon Without Rivers: a History of the Pacific Salmon Crisis

Would you like to help a threatened or endangered salmon run survive?

Not much more than a century ago, many of our rivers and streams here in the Pacific Northwest teemed with abundant salmon and steelhead runs. Thanks to humans, today the Puget Sound, Lower Columbia River, Upper Willamette River, and other Chinook salmon runs are listed as threatened under the Endangered Species Act. 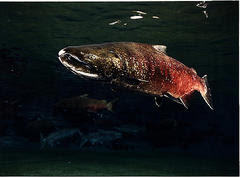 Across the region there are lots of opportunities to volunteer to help restore salmon streams, even if just for a few hours or a day (see links at the bottom of this post). A typical event includes clearing non-native, invasive plants and planting native plants and trees along streambanks, which improves habitat for salmon and their chances of spawning and survival.

On a recent lovely spring afternoon I kayak up Swamp Creek north of Seattle, one of my adopted salmon streams, to see how it’s faring. Back in the late 1990s, I helped organize and recruit a work party to plant willow, spruce, and western red cedar trees along its banks. Now this is the City of Kenmore’s new Swamp Creek Park and is targeted for some more habitat restoration through a conservation funding grant. 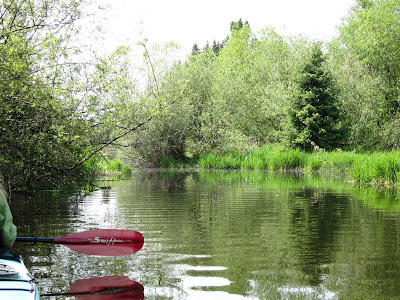 After putting in our kayaks at the Washington Department of Fish and Wildlife’s boat launch in Kenmore, we paddle about ¼-mile up the Sammamish River to the mouth of Swamp Creek.

Bird songs and brilliant greenery shout springtime as we ease our kayaks up the mostly placid stream. We pass several plump little red-winged blackbirds perched in willows, cattails, and alders that line the stream. Their songs begin with a sweet trill and end with a guttural buzz that sounds like a car slamming on its brakes. We also flush out a couple great blue herons, awkward yet oddly graceful as they tuck in their long necks and flap large wings to fly away.

Beneath us the stream is murky and green, its stillness broken by the plop-drip cadence of kayak paddles moving in and out of the water. Occasionally I hear a splash and see glint of silver—fish jumping. 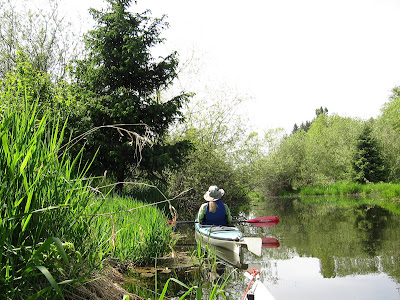 “Wow, look at how much some of these trees have grown!” cries Julie. Several of the spruce trees we planted years ago have pushed 10 and even 20 or more feet toward the sky. Many are healthy trees glowing deep green and covered with clumps of newly sprouted needles. 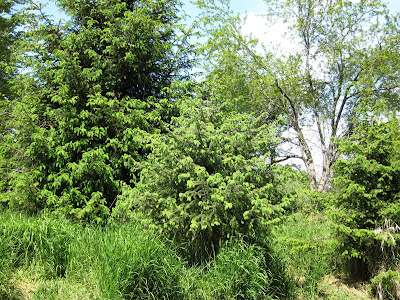 Some trees, not so much.

One poor little tree that didn’t make it was cut and stripped by beavers that inhabit the creek. 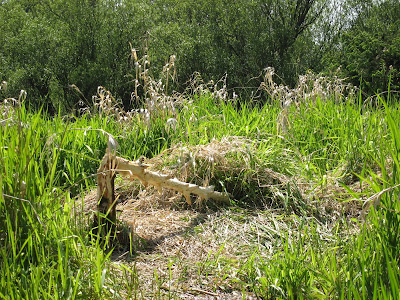 I also spy fish remnants near the stream edge. Something was out here munching it. 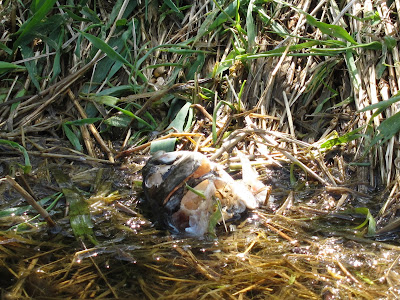 Although several of the trees we planted close to the stream have grown and thrive, Swamp Creek Park is still a highly disturbed habitat overrun with invasive plants like Himalayan blackberries that threaten to choke out native plants like salmonberry. In the ecosystem chain, aquatic insects and other indigenous critters like salmon and birds need native plants for sustenance and refuge. 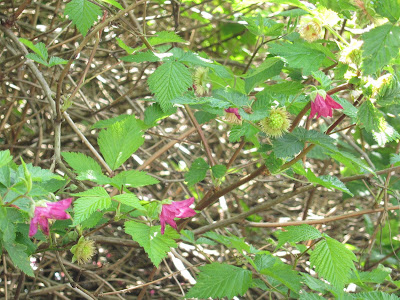 The numerous fish runs in the stream are struggling, and recent 2009 salmon monitoring surveys didn’t count any salmon returning to spawn upstream.

“Swamp Creek is having a few bad years,” says Sara Noland, a wetlands scientist from ESA Adolfson who is working with the City of Kenmore on the Swamp Creek Restoration Plan. The City’s plan is to root out invasive plants and replant with natives in a 3-acre area of the park that borders the creek.

“The ultimate goal is to get a core of community volunteers involved in supporting and monitoring the restoration efforts,” adds Sara. “It’s a pleasure to work on this project, and the community volunteer turnout for our April event at Swamp Creek was great!” More events will be planned for Swamp Creek, most likely starting again in autumn of 2010. (Check the City of Kenmore’s website if you live in the area.)

True, there’s a lot more to saving salmon than restoring stream habitat along streams or rivers. But small efforts can add up.

So how about starting with one of the many volunteer events around the region? Who knows, maybe you’ll make some new friends while you’re at it.

You can make a difference.

I sincerely thank you for your efforts! 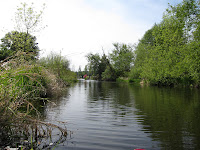 When You Go
Lots of public and private organizations here in the Northwest are involved in salmon stream restoration. Here are some links, but you can also do a Web search for opportunities in your town: People for Puget Sound, Oregon Watersheds, King County (Washington), River Restoration Northwest. Chinook salmon photo from Washington Department of Fish and Wildlife.
Posted by jill

Really enjoyed your blog, Jill. How rewarding to see the fruits of your labor!

Always a pleasure to read your blogs Jill! 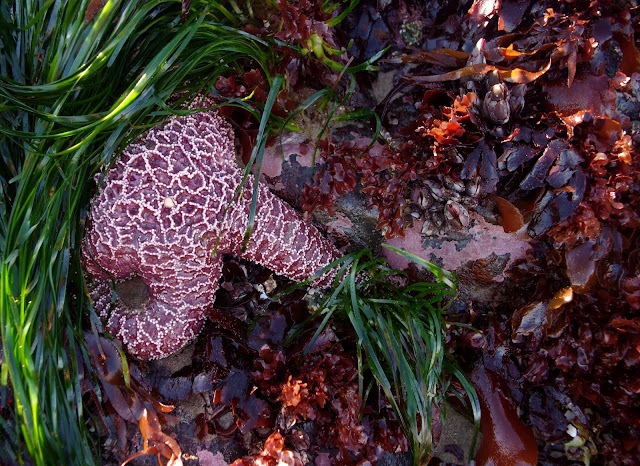