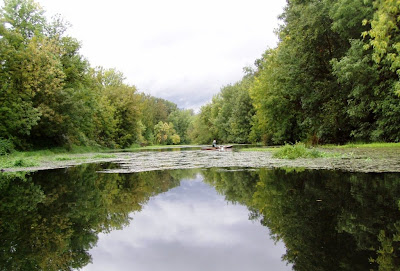 We’re driving south on I-5 through sheets of rain so thick you’d think it was a blizzard. “Wow, did you feel the car just hydroplane?” I gasp. Rich slows down.

Our destination is the Black River near Rochester, Washington, about 30 miles southwest of Olympia. Unfortunately we’ve chosen a day with some wild and whacky weather. “Hey, did you see that flash of lightning over to the east?” says Rich. Oh great, I think to myself.

About 5 minutes later we see a break in the clouds and a patch of blue sky to the southwest, so we banish thoughts of bailing and forge on. “With our raingear on and sprayskirt over the cockpit, we can’t get that cold or wet, right?” says Rich. “Right,” I mumble, knowing full well I’ve gotten very cold and wet while kayaking in raingear before.

After exiting I-5 onto State Route 12, we drive about 5 miles west and find the unmarked gravel turnoff from Moon Road, where we park and launch. 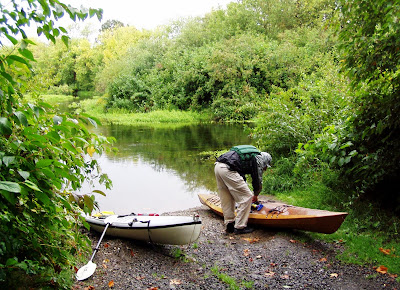 Since the Black River’s main source is a lowland lake rather than snow melt from the mountains, it’s an easy year-round trip for canoers and sea kayakers. This is not where you go for whitewater action.

As we ease our sea kayaks into the placid river and head upstream, as if on cue the rain subsides and the sun streams through the clouds. (This is what Northwesterners call a sunbreak.) 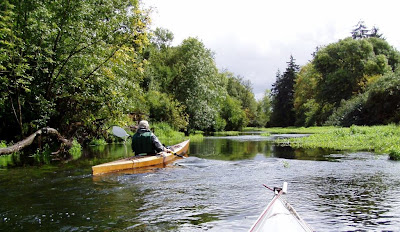 Maybe we really will experience the “fairyland of butterflies and birds,” as a guidebook exuberantly described paddling here. In 1980, U. S. Fish and Wildlife Service identified the Black River as one of the most important fish and wildlife habitats in the state, so several miles of the valuable riparian habitat along the river are protected as a wildlife refuge. 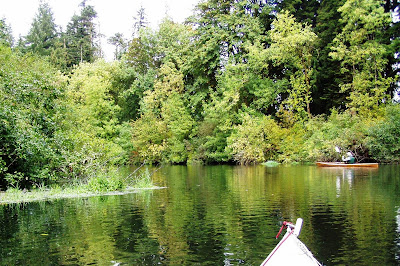 We’re surrounded by green, gold, and a tinge of red on this early fall day. Alder, willow, red-osier dogwood, and a profusion of other trees and shrubs almost engulf the narrow river channel here. The unmistakable chatter of a belted kingfisher echoes upriver, and soon we see it swooping from tree to tree on the river’s edge just ahead of us. 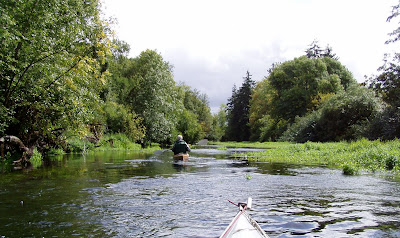 Ten minutes later, Rich glances up at the bruised-looking sky and announces, “We’re in for some more rain soon.” Almost as quickly as the sun came out, the rains return. Up go our hoods, and sunglasses get stashed back into our pockets.

And so it goes for the next couple hours. We paddle past forested and pasture-lined river, passing a couple houses along the way and cruising under a railroad bridge. The downpours come and go. We get pretty wet, but it’s not that cold. The current is mild, although kayaking upstream does require a teensy bit of muscle. 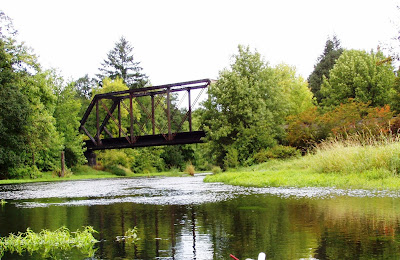 I’d hardly call it a fairlyland, though. No butterflies and not that many birds, although we do see some ducks and a few great blue herons. Probably we’ve come too late (or early) in the season or all those creatures are hunkered down because of the rain, like we should be.

It’s peaceful and quiet here on the river until we suddenly hear gunshots. Close by.

As we loop around a tree-lined oxbow in the river, the shots get closer and louder, which makes me uncomfortable. Maybe we’ll get mistaken for oversized, Gore-tex clad geese. 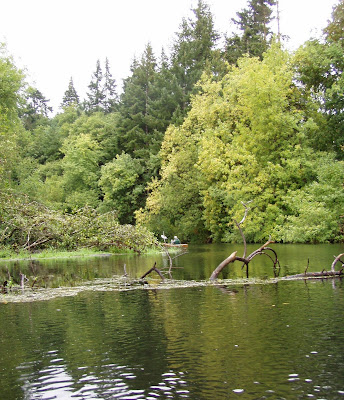 “I don’t want to be a headline in the newspaper,” says Rich. He doesn’t need to explain, I can see the headline myself: KAYAKERS ACCIDENTALLY SHOT ON RIVER. So we turn around and head back downriver. The riverside scenery is getting more monotonous anyway the farther upriver we go. 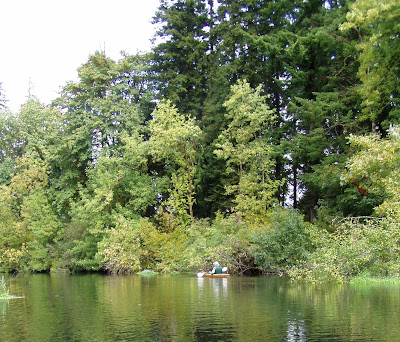 Since we’re heading downstream now, we make better time and even shoot through a couple baby rapids, which is fun. At one point we’re surrounded by buff-bellied swallows flying in circles above and around us in quick speedy spurts. Those little birds move fast!

As we’re hauling our kayaks out of the river and loading up the car, we get a dose of the local wildlife— homo sapiens. Tires spin on gravel in the pullout just above us and a car door opens and slams shut. About 10 yards uphill a guy runs up to the closest fire hydrant, uh, tree and….

When You Go
Don’t go during the fall duck hunting season! To be fair, we hit the Black River on a pretty crummy day. This trip would be better as a one-way car shuttle trip with a couple vehicles, starting up river and paddling the 12 miles downriver to Oakville. And go when it’s not raining!
Posted by jill

Hi Jill,
Taking you as inspiration, Susann and I took a 2-day trip on the Cascade Loop last Sunday and Monday - lovely weather, lovely time. Thanks for your posts!

Barry! That's great! Hope you got a good dose of Methow magic. I bet the vine maples were starting to turn crimson over the Cascades...
and the apples and pear!
jill

The information here is great. I will invite my friends here.

Just FYI there is a gun range just a few miles upstream from where you launched. It's just across the road from the river. My guess is that is what you heard. I would have gladly used it as an excuse to turn around if it was pouring on me though!

Thanks "anonymous" for the tip about the gun range! Yea that was a few years ago, haven't been back. Waiting for a nicer day. cheers!