Squak Mountain: Hiking through the Winter 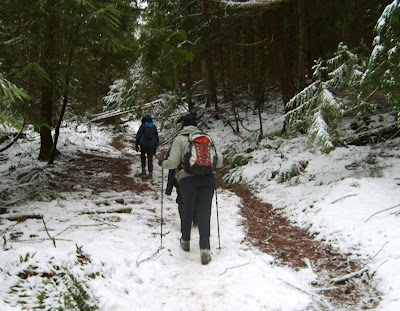 Normally Seattle area hikers go to the Issaquah Alps for winter hiking to avoid snow-covered trails in the higher Cascades. But this hasn’t been a normal year.

A few weeks ago I joined Blue Heron Zen for a silent meditation hike on 2,024-foot-high Squak Mountain, just a few minutes southwest of downtown Issaquah in the Cascade foothills. For being so close to a major metropolitan area, Squak’s miles of lovely forest trails are relatively uncrowded. Today we see only two other hikers. On a weekend last summer, we saw only four others.

Squak Mountain became a state park in 1972 when the Bullitt family donated almost 600 acres at the top of the mountain with the provision that the land remain in a natural state. Years ago the mountain was logged and used for coal mining. Since then, the forest has regenerated to a lush temperate rainforest. Today you can still see remnant stumps of the huge old cedar and Douglas fir trees that used to mantle the mountain.

“You’re going to hit pretty deep snow soon and lots of downed trees,” says a woman hiking down the mountain as we head up. “Expect lots of potty-mouth moments as you sink into the snow and crawl over and under trees across the trail.” Since this is a silent hike, they’ll be potty-mouth thoughts instead. 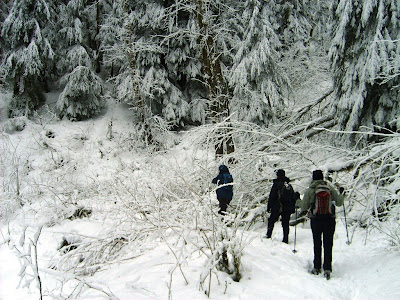 After about 40 minutes hiking upward, the trail is covered in slick, packed snow. After an hour, branches of the Douglas fir and hemlock trees along the trail are weighted down with a thick crust of snow. I have to step carefully into the sunken footsteps of those ahead of me to avoid sinking up to my knees. I’m wishing I’d strapped on snow shoes and gaiters.

But it’s beautiful out here in the quiet winter forest glazed in white. And light despite the steel gray clouds overhead. A blanket of snow always brightens up the landscape, no matter what time of day.

About halfway into our planned loop, the footsteps on the trail stop. No one has ventured farther in this deep snow. Our hike leader Anita decides to call a meeting and break the silence. 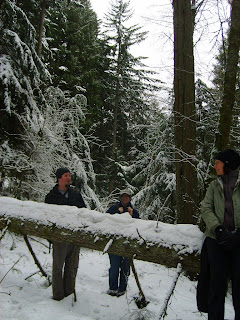 “We’re a little less than halfway, but I wanted to see how everyone is doing and whether we want to continue.” Some of us are noncommittal, but Jeff speaks up and we’re all glad he did. “I’m sinking deeper than everyone else with each step. There are potential dangers.” We decide breaking trail in the waning afternoon light wouldn’t be wise and head back down.

Since I was on Squak, a heavy rainstorm melted most of the snow I encountered. Be careful out there anyway!

When You Go
There are several trailheads to Squak Mountain:
Leave from the Issaquah Trail Center at 110 S.E. Bush St. in Issaquah. To get there, head east on Interstate 90 to Exit 17 in Issaquah. Go south on Front Street for .8 mile and turn left on Bush Street. The Trail Center is a block and a half ahead on the left. Parking is available on the street.

To pick up the Squak Mountain Access Trail, walk west on Bush Street to Front Street and after crossing the street, head left for a block to Newport Way. Go right and just ahead to Wildwood Boulevard. The gravel road (just ahead on the left) that follows the creek is the Squak Mountain Access Trail. It heads south for about 2 miles, eventually hooking up with the East Ridge Trail.

West Access Trailhead: Go east on I-90 to Exit 15, just west of Issaquah. Head south on Highway 900 for 2.5 miles to a small gravel parking lot on your left.

Squak Mountain State Park: Go east on I-90 to Exit 15, just west of Issaquah. Head south on Highway 900 for 4 miles to Southeast May Valley Road and turn left. The park entrance is 2.6 miles ahead on the left. There is a $5 day-use fee for parking. Green Trails Map, Cougar Mountain Squak Mountain 203S
Posted by jill 3 comments: Links to this post

Kicking and Gliding into the New Year 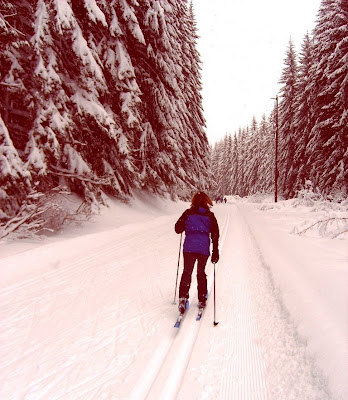 Our ski season was a little late getting started this year, but it heated up to full boil quickly. With several big snowfalls in the Cascades the last month, Northwest skiers and riders are out shredding and gliding in the new year. Where are some good spots to get started?

I like to warm up gradually my first few times out each season. This year my first trip to the mountains is to cross-country ski on the Iron Horse Trail just east of Snoqualmie Pass.

The section of this 110-mile-long former railroad/now recreational trail that runs along Keechelus Lake is kick-and-glide and skating heaven. Starting at an old train depot below present-day Hyak*, you can ski over 15 miles out and back on a wide, tracked and groomed, mostly flat trail. (My late aunt remembered taking the ski train from Seattle up here to ski at the long-gone Milwaukee Ski Bowl.)

When we pull into the parking area a little after 9:30 a.m., less than a dozen vehicles are in the lot. We’re ahead of the crowds. It’s snowing lightly and a chilly 22 degrees. After a pit stop in the heated bathrooms in the converted train depot, we’re off to the groomed track trail. 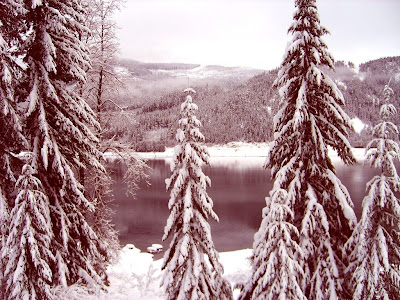 With a fresh layer of light snow atop a decent base, skiing today is smooth and fast. After a half mile or so, we start getting glimpses of the slate gray lake to our left as we’re headed east. We pass through corridors of tall evergreens encrusted with a thick layer of snow.

A couple miles from the parking lot, a bathroom lies just off the trail. This is a perfect stop for 5-year-old Lena, the youngest in our group today. In years past we’ve skied down off the trail and had lunch at the picnic table nearby, but today it’s obscured by a thick blanket of snow. 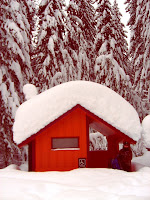 “Let’s ski to the avalanche zone and then think about lunch,” says Mark. We ski a few more miles and reach a sign on the trail warning that we’re entering an avalanche and rockslide zone.

With an early melt and freeze atop the base layer of snow this season, Cascade slopes will be more prone than usual to avalanches throughout the winter and spring. Along the lake in the avalanche zone, the slope just above the trail stretches about 30 feet up to the treeline.

Those of us in the lead decide to proceed with caution. After I turn around and head back, a man skiing past me points to the slope just 10 feet to my left and says “This looks like it could let loose any time.” I glance over and realize, yikes! He’s right. Something about the heavy set of the thick snow on the short but steep slope looks ominous. (I bet after the heavy rainstorm a couple days ago these slopes did slide.) 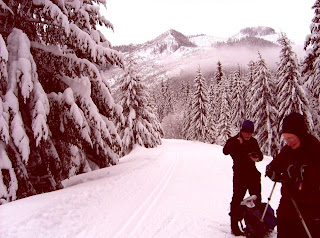 When we all meet up at a spot overlooking Keechelus Lake for lunch, Mark and John pull out their avalanche shovels and dig us a bench in the snow just off the trail. We pull out tarps and sit pads, and out come the thermos of hot tea, sandwiches, and leftover Christmas goodies.

On the way back I decide to pick up my pace a bit for the exercise. Lucky Lena gets towed by her parents, so they get good exercise regardless of their slower pace. 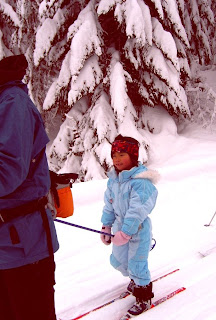 By the time we get back to the parking lot at 2 p.m., it’s packed with cars and families using the sledding hill just north of the lot. Good time to head out.

When You Go
The Iron Horse Trail is also called the John Wayne Trail. Heading east on I-90, take the Hyak exit (Exit 54). At the bottom of the exit take a left before the entrance to Summit East ski area and then a right at the sign to the Hyak Sno-Park. You’ll need an annual Washington State Sno-Park permit or you can pay $10 when you get there for a day parking pass. Go early! It gets busy after 10 a.m. on the weekends.

*Hyak, or Summit East ski area, was hit by a massive snow and mudslide this week, likely shutting them down for the ski season. This shouldn’t affect the Iron Horse Trail, but check online before you head up.
Posted by jill 4 comments: Links to this post 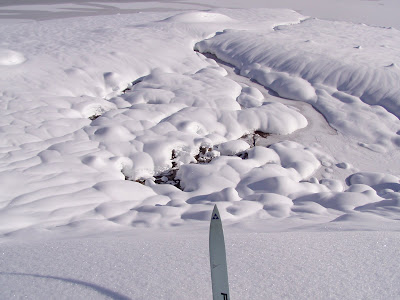 This weekend I'm finally getting out into the mountains for some skiing and hiking after the holiday frenzy. Look for new posts on cross-country skiing at Snoqualmie Pass and winter hiking in the Issaquah Alps in the next couple weeks.

Although we love it here, many Northwesterners still want a break from our long gray winters and head south for warmth and sunshine. Self included. So for a change of pace, take a quick break with me by clicking here to read about my trip sea kayaking in the Sea of Cortes in Baja California, Mexico.