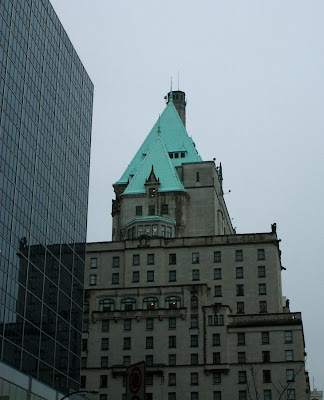 One of the great things about being in the Northwest is our proximity to beautiful British Columbia. B.C.’s cosmopolitan Vancouver is the northern link in the chain of progressive West Coast cities spanning south to San Francisco. Northwesterners often head up to Vancouver for weekend getaways. I’d never taken the train there, so I jump at a friend’s invite to ride Amtrak to Vancouver. Our plan is to catch the morning train, spend an afternoon lunching and taking in some of the scenic city, and catch the 5:45 p.m. train home.

We bypass the hassle of parking downtown Seattle near King Street Station and go instead to the small Amtrak station in Edmonds, about 20 miles north of Seattle. Our train pulls up right on schedule at 8:17 a.m. “All aboard for Everett, Mount Vernon, Bellingham, and Vancouver!” cries the conductor. We hop on, lucky to score seats on the upper level west side of the train (the water view side). Despite the low hanging clouds and pewter gray skies, we pass through lovely pastoral landscapes and gorgeous water views as we skirt along the Puget Sound shoreline for much of the trip. Startling white snow geese are scattered around the fallow fields of the Skagit flats, and flocks of migrating waterfowl bob and dive in the Sound.

Our train is supposed to arrive at 11:35, but when we hit the B.C. Lower Mainland south of Vancouver the train stops to wait for passing trains and then moves slowly. By the time we arrive and go through customs, it’s almost 12:30. Drat, an hour less to explore. But it’s not really exploring weather. We’re blessed with a rainy, chilly November day that makes me want to curl up with good book in front of a fireplace. I don’t tell my friend Don, but instead of strolling around Vancouver, I feel like stopping in a coffee shop every couple blocks for a hot cocoa. It’s that kind of day.

I’d hoped to hit some of the hip new neighborhoods and have a good lunch in a trendy cafe worthy of Vancouver’s foodie reputation. Instead we hop on the Skytrain to Robson Street because, well, it’s easy and we don’t have to walk in the rain so much. Robson is tourist Grand Central for shopping, with stores selling Canadian-themed knickknacks interspersed with boutiques. We lunch at one of the first places we pass, a Greek restaurant called Kalypso Ouzeria. Our lunch is nothing special, although the Greek feta, tomato, and cucumber side salad is nicely prepared and tasty.

I’m on the hunt for maple sugar candy for Christmas, so we stop in a few of the tourist shops. Then we walk through the lobby of the historic Hotel Vancouver, which opened in 1939 with a visit from England’s King George and Queen Elizabeth. With decorated Christmas trees and garlands of lights, the ambience is warm and elegant. 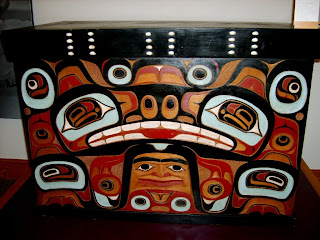 We decide to head toward Gastown, but I notice an art gallery off a courtyard behind the Cathedral Place on Hornby Street. “Hey, let’s stop in here,” I tell Don as I dash up the steps.

The Bill Reid Gallery of Northwest Coast Art just opened last May. This gallery is well-lit with spacious cathedral-style ceilings. While not as extensive as the impressive Museum of Anthropology at University of British Columbia in West Vancouver, this cozy space has a nice sampling of the late Bill Reid’s traditional Haida-inspired mixed-media jewelry, prints, wood carvings, and sculpture. In the lobby we’re offered pieces of birthday cake in celebration of anthropologist Claude Levi-Strauss’s 100th birthday. We don’t see Claude, though. 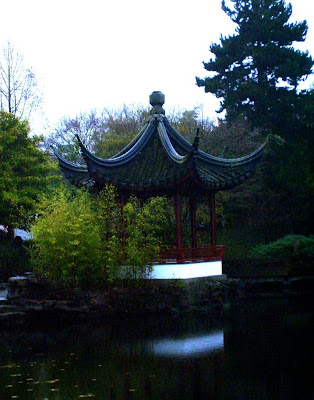 After a break for hot drinks, our next stop is the Dr. Sun Yat-Sen Classical Chinese Garden in Chinatown, which is listed in the book 1,000 Things to See Before You Die. You wouldn’t think visiting a garden on a cold, rainy day when it’s quickly turning dark would be the wisest stop. But it’s absolutely wonderful.

We have the place almost to ourselves as we walk through the covered passageways around this Ming Dynasty-style formal garden. As the volunteer in the gift shop points out, “On rainy days it’s especially soothing to hear the water pouring off the tile roofs.” Two large ponds are rimmed by carefully pruned vegetation and unusual weathered rocks. Snippets of poetry are scattered around the garden, adding to the mystical old Asian vibe:

Courtyard ever green
All four seasons with blossoming trees

I’m inspired to whip out my journal and compose a loose haiku on the spot:

With night drawing close in this northern city, we catch the Skytrain back to the main train station around 5 p.m. Don is disappointed that Amtrak has discontinued their dining car service since his last trip. I buy a decent turkey sandwich in the snack car, and Don gets a wild salmon entrée, which he enjoys. It’s a long ride home in the dark, with a stop at the border for customs. We pull into Edmonds at about 9:45 p.m. Despite the rain, I do enjoy the adventure. But next time I'll spend the night. If you're coming up from Oregon, spend at least two nights. If you want to make it a day trip from the Puget Sound region, I recommend going in the late spring or summer when our days are longer.

When You Go
Make reservations and purchase Amtrak tickets online at Cascades ticket reservations. The earlier you book, the cheaper the tickets. For a map of downtown Vancouver, click here. Admission fees to both the Bill Reid Gallery and the Dr. Sun Yat-Sen Classical Chinese Garden are $10 Canadian.
Posted by jill

This post is awesome, definitely helping me right now plan a day trip to Vancouver this weekend!