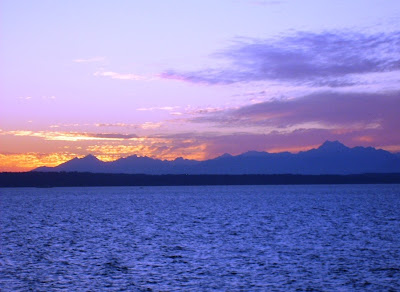 With backdrop that could have been conjured by a movie set designer, Seattle is a city of spectacular sunsets. While the setting sun drops behind the jagged silhouette of the Olympic Mountains, the expansive waters of Puget Sound or Lake Washington reflect the changing hue of the sky. So where are the best spots around town to catch this splendor?

I remember with vivid clarity the first Seattle sunset that made me gasp for its stunning beauty: it was a warm summer evening as I drove west across Lake Washington on the Evergreen Point floating bridge. Spread before me like a gift was a deep tangerine-pink sky, the cobalt blue Olympics, and the surface of the lake shimmering icy white-blue, lighter than the sky and land above. “Wow!” I yelled to myself several times.

With so many great places to watch the sunset around Seattle, it’s hard to suggest just a few. Jump in and share your favorite spots with a comment below! 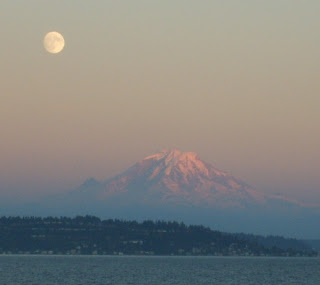 The deck of a Washington State ferry. Vashon-Fauntleroy, Bremerton, Bainbridge, and Edmonds-Kingston runs are best because they’re all within the shadow of the Olympics. From the ferries (and a few of the bluffs listed below) you get the extra treat of a strawberry-ice-cream-pink Mount Rainier on the southeast horizon.

On a sailboat, power boat, or in a sea kayak on Puget Sound. Be sure your boat is equipped with good lights for the ride back to land after dark. 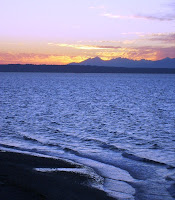 Consider yourself lucky if you score an invite to (or live in) many of the homes with views of the Olympics behind Puget Sound. I’ve been fortunate to watch several sunsets from the rooftop deck of a three-story home on Magnolia—most recently while sipping a perfectly mixed mojito. Now that was truly an ahhh-worthy event. You, too, could have a similar experience from, say, the deck at Ray’s Boathouse at Shilshole in the western edge of Ballard. 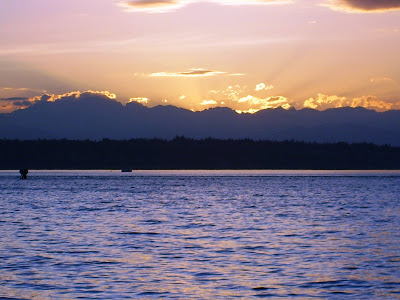 Don’t think this is just a summer pleasure. Some of our best sunsets are on those cold, clear fall and winter evenings. Grab a blanket, a thermos of hot tea or spiced wine, someone to cuddle with and get out there next time those clouds blow away.
Posted by jill

Indeed, Mt. Rainer in alpenglow is a sight to behold.

Thanks for reminding those of us that live here to stop and enjoy our largesse! It's so easy to get busy and forgot to take a look .... My kids are always awed by the sunset from the Bainbridge ferry.

Your bridge story sums it up nicely... taking in a sunset with those pink, orange, and violet skies melting in to the hills and mountains beyond lake washington is truly a sight to behold.

Love this post. I painted a room in my home a color that I thought captured our sunsets at the moment between orange and pink. Recently a professional interior house painter told me it was the best color he had ever seen.