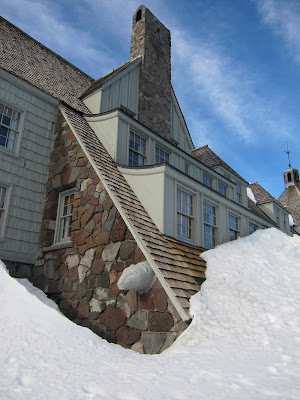 "This is my favorite building in the world on my favorite mountain in the world," says Richard. We're sitting at a rustic wooden table in a window alcove at Timberline Lodge on Mount Hood, overlooking what seems like half the state of Oregon spread across the horizon below us.

I completely agree with him.

When I was a teenager, I fell hard for Timberline Lodge and Mount Hood.  Our relationship started during my occasional trips there as a girl, deepened when I spent a week rooming at the lodge for ski race camp, and  cemented when I began and ended a week-long backpack trip on the TimberlineTrail at Timberline circumnavigating the mountain. 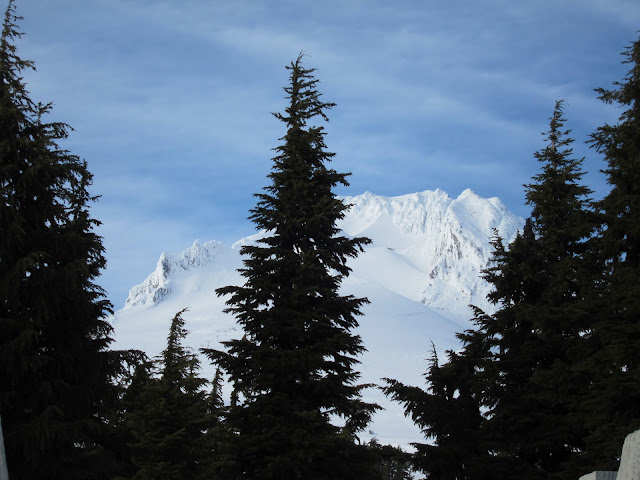 Richard and I aren't alone in how we feel about the lodge. This National Historic Landmark on Mount Hood is beloved by many for its massive free-standing stone fireplace, impressive collection of vintage 1930s artisan works, beautiful woodwork and majestic timber beams, and much more. 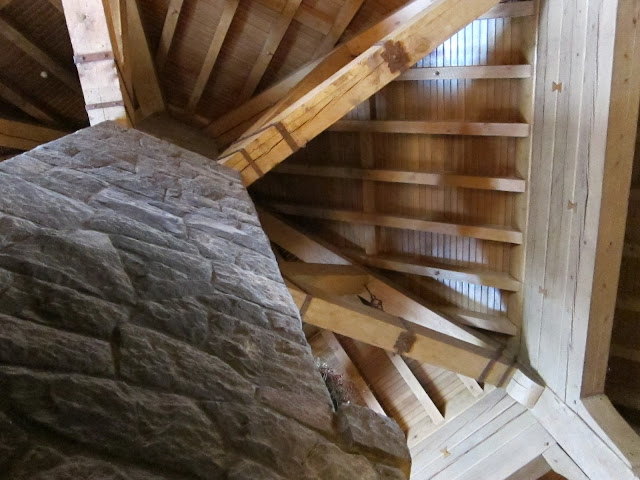 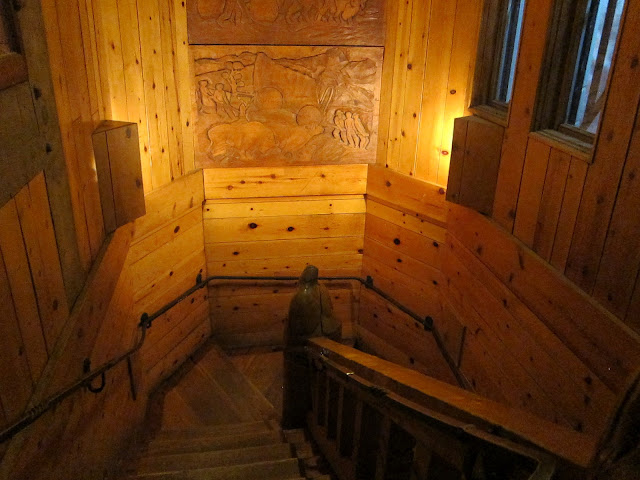 While Timberline Lodge has always felt grand and historic to me, this year she's celebrating her 75th anniversary as a glorious example of the Great Depression-era Worker's Progress Administration output. After some troubled early adulthood and middle-aged years, the lodge and much of its art has since been carefully restored and preserved. 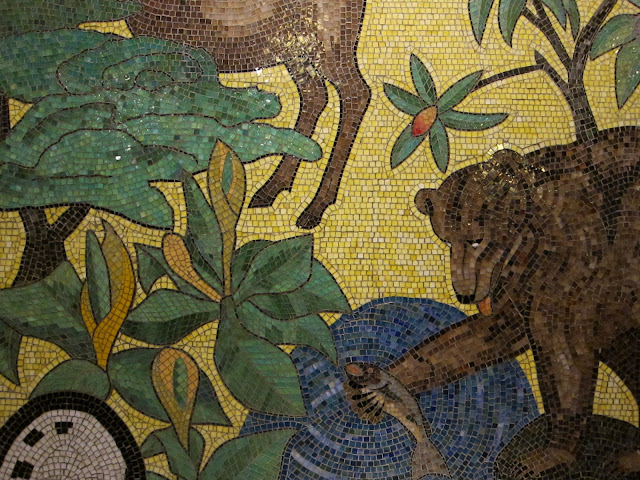 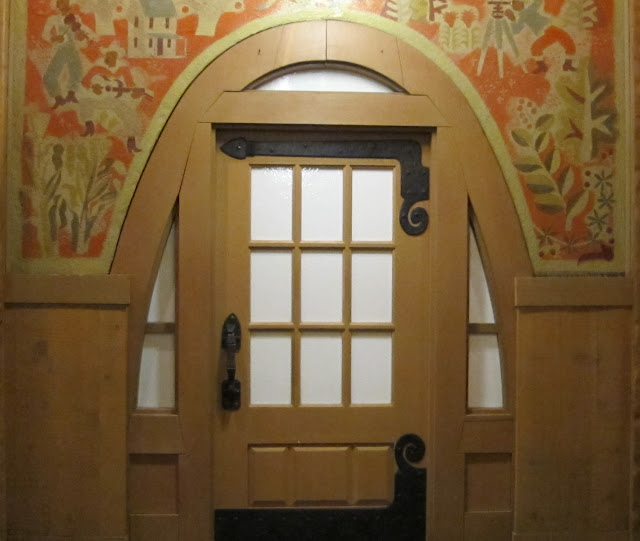 Here at 6,000 feet on the southern flank of Mount Hood, historic Timberline Lodge offers a cozy refuge to sit and watch the world below, or a base for more active mountain adventures.

This afternoon I skied the wide open, mellow slopes off the Magic Mile chairlift above the lodge. At the top of the lift, wind gusts were hitting over 30 mph and bringing the wind chill to well below freezing, so we bundled up  this April day in layers of fleece and down. 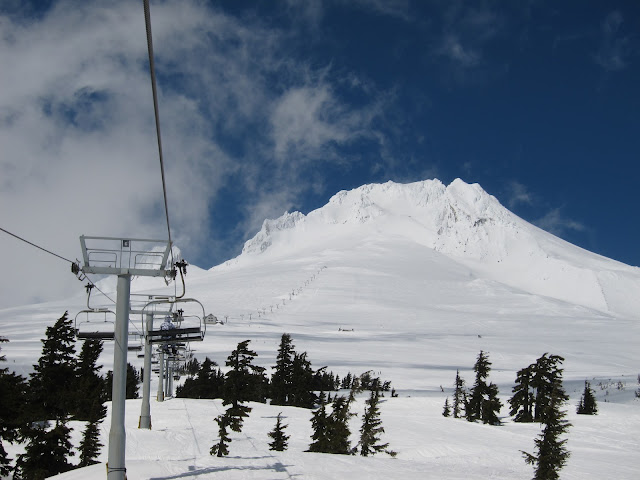 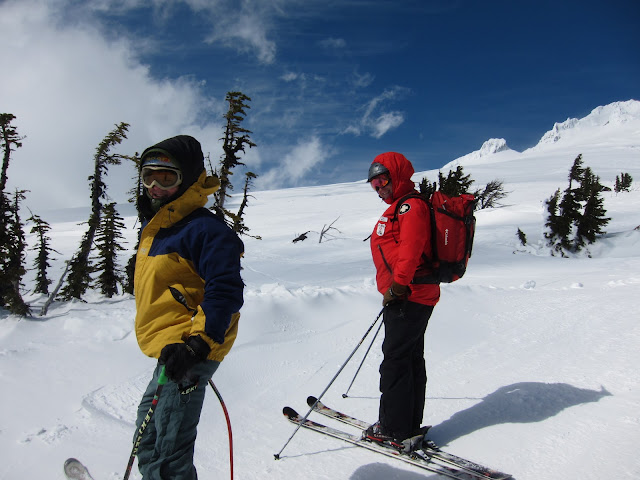 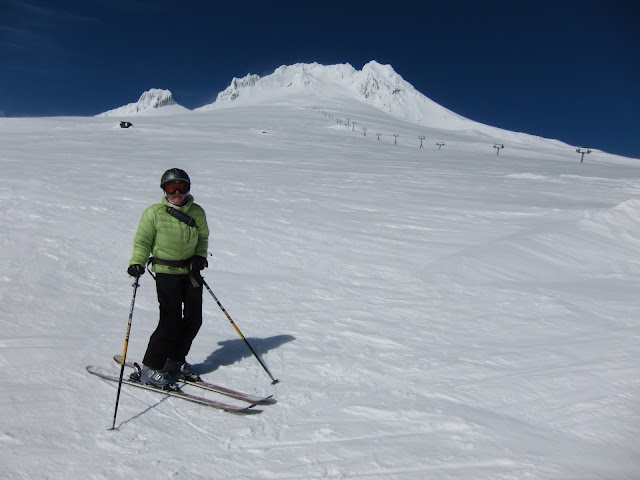 While the skiing here is not challenging, it's always exhilarating to ski down the slopes of this dormant volcano. In the summer the Palmer Lift is packed with racers and riders from around the world training in the off season. 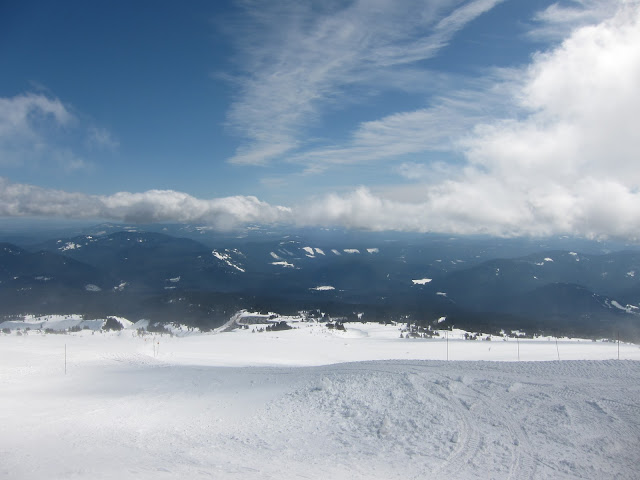 This evening after a tasty dinner in the Ram's Head bar, we relax beside the massive stone fireplace and play old-fashioned Scrabble. Later we strike up a conversation with the couple on the sofa across from us. People are generally happy and friendly under the spell of this special place. 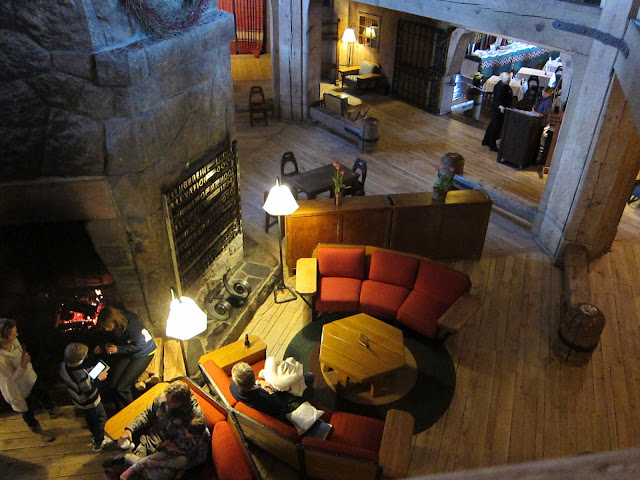 Part of the charms of Timberline are the many nooks and hidden places to discover, like the tiny Blue Ox Bar in the ground level (not open today). A typical room decorated in vintage 1930s-era style has been recreated on the ground level also, as a museum piece. While the old typewriters are long gone, the rooms are still cozy. 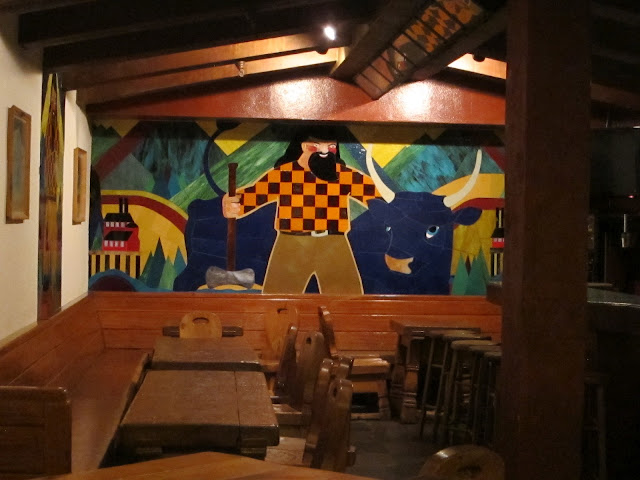 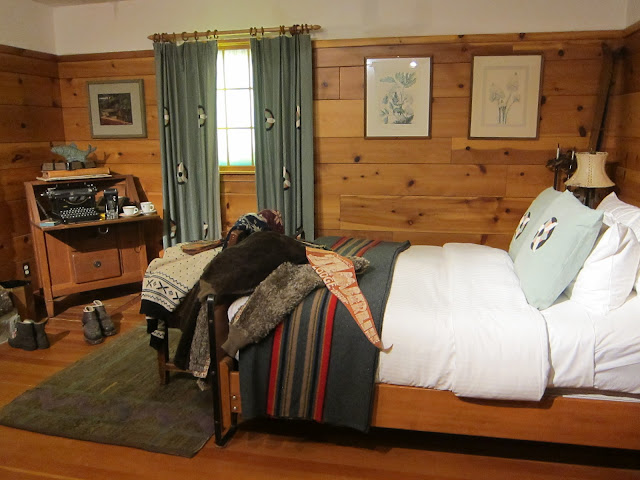 I never tire of coming to Timberline Lodge, either as a base for skiing or hiking, or to hang out and wander around. I'm just happy to help her celebrate 75 years of rustic magnificence.

What are your favorite memories of Timberline/Mount Hood? Have you ever climbed or circumnavigated the mountain?  Thanks for sharing your comments below!

When You Go
Here's a link to a list of events going on this year at Timberline, which is about an hour drive east of Portland via Highway 26. While night skiiing is done for the season this year, the Magic Mile is still operating days, and of course the Palmer Chairlift will be open for the summer on May 29.


I
Posted by jill 7 comments: Links to this post 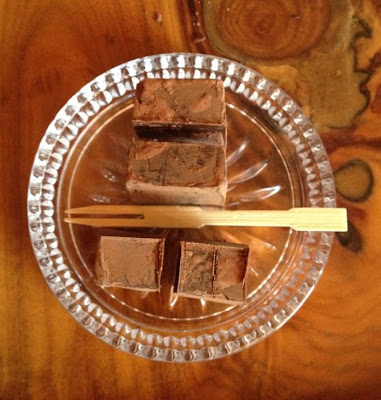 
And oh are these pairings sensational!
Zen Dog already has a growing cadre of followers for his fine Chinese teas served gong-fu style and his monthly lunar music and art events, sponsored talks, and summer tea festival.  I anticipate a whole new wave of fans now.


While having tea at Zen Dog last week, ZD (Zen Dog for short, as he likes to be called) shared with us one of Intrigue Chocolate's Zen Dog Bark chocolate truffle bars created by Barthel using Zen Dog teas.  While I don't claim to be a fancy connoisseur, I've had enough high-quality chocolate across the U.S. and Europe to know an incredible chocolate when I taste it. 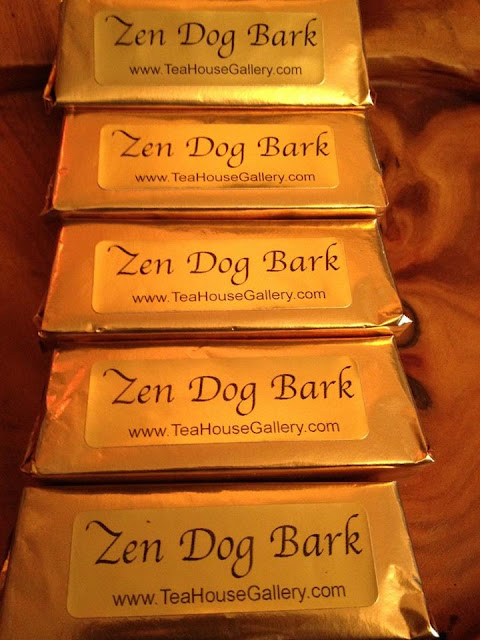 The intriguing mix of exquisite dark chocolate mixed with white pu-er  and lavendar teas teased then pleased my palate. While I let the intense, rich flavor of the chocolate melt on the tongue, I felt blissful and thrillingly alive.

A good chocolate can do that.

At the time ZD and tea master Steve Bonnell were tasting a darker pu-er tea, which was not a good combination with the chocolate. For the Zen Dog Bark, the two teas infused within the chocolate (Moonlight white and  lavendar) would pair nicely, but the Dian Hong red tea, according to ZD, "really nailed it and added depth to the flavors. That pairing is a  perfect marriage in the mouth." 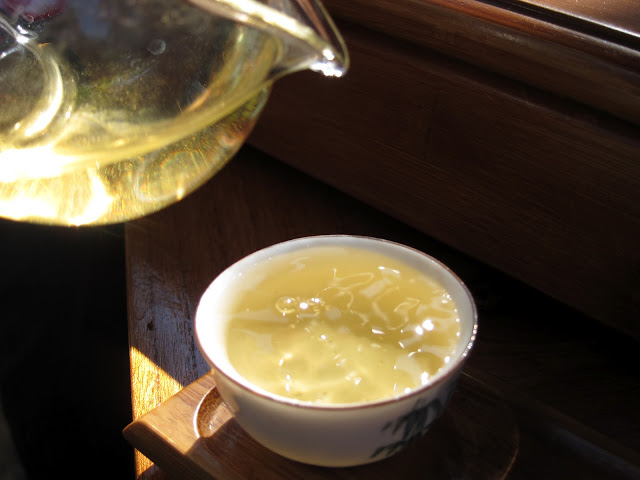 I stopped by Intrigue Chocolate's tasting room in Pioneer Square a couple weeks ago to taste chocolates with Aaron Barthel.  He's a happy, jovial man who loves his chosen path in life--making artisan chocolate in the French tradition. His chocolate truffles are made from mostly local and fresh ingredients using premium chocolates. I ask if he went to school to learn his craft, assuming an advanced degree. 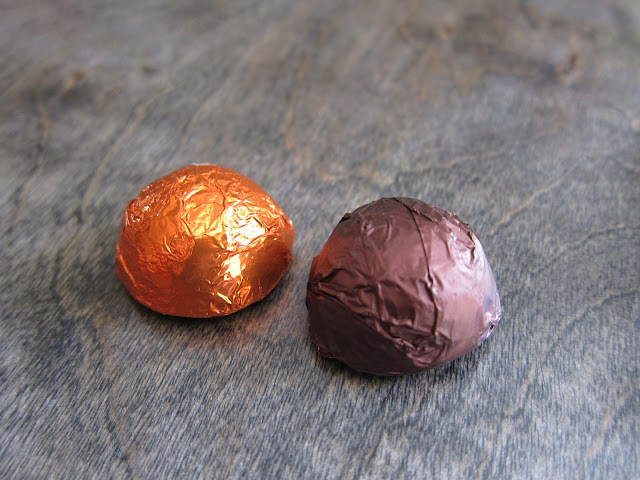 "I'm self taught," he says with a smile.  Aaron always seems to be smiling genuine, happy smiles.  A passion for his art shines through in his exquisite chocolates, which vary by flavor month to month. My favorite today was the Fortunato No. 4, made from a rare variety of recently rediscovered organic white cacao beans grown in a remote northern Peru valley. 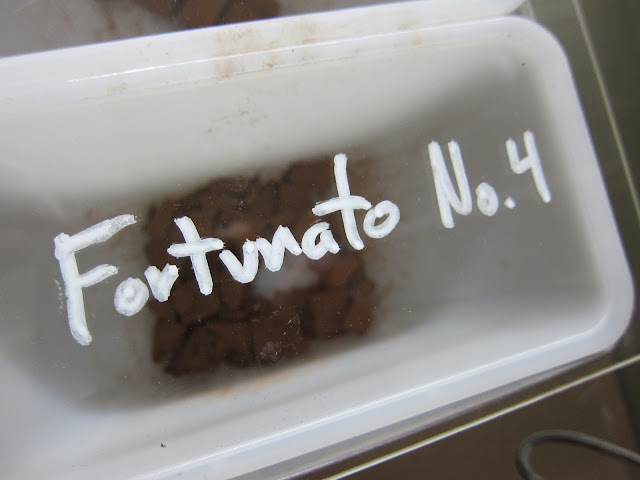 When You Go
The next tea/chocolate event at Zen dog will be Tuesday, April 17 from 5 to 8 pm, with a small fee of $5. You can purchase the brick bar of truffled chocolates, which would be a perfect dessert or indulgent afternoon snack to share with a friend or lover, for $9. Or stop by Intrigue Chocolate's tasting room in Pioneer Square and taste the whole gamut of this months' flavors.

A mere 150 years ago, present-day metropolitan Seattle was full of abundant old growth forests, long-gone marshes, and just a handful of European-American settlers.  My how things have changed around here.

Today my oldest sister has organized a field trip to visit sites integral to our family's, and Seattle's, history. While the weather is rain and chilly, on a sunny day this would be a fun trip for anyone with an interest in history.

Called the birthplace of Seattle, the low-lying Alki Point area of West Seattle was where my great-great grandfather Hans Martin Hanson arrived in 1868 and settled, 17 years after the first group of settlers (the Denny Party) landed on Alki Beach. Of course when the Euro-Americans arrived, the area was already inhabited by the local Duwamish people, who had been here for thousands of years.


Although the Hanson family owned 320 acres that encompassed Alki Point for many years, alas, this prime real estate that today is packed with beachfront condos and pricey craftsman homes is no longer in the family. 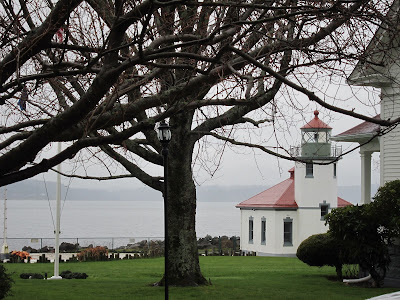 We start at the Alki Point Lighthouse, which is not open to the public today. Too early in the season.  The historic lighthouse, built in 1913, sits at the westernmost point of West Seattle and the southern entrance to Elliott Bay.  Before the lighthouse was built, my great-great gramps and his family regularly put a lantern out on the point at night as a service to passing ships. 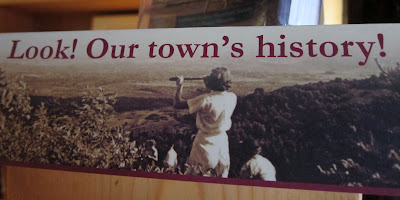 Next we stop in front of the oldest house in Seattle at 3045 64th Avenue SW, a few blocks from Alki Point and half a block from Alki Beach. You wouldn't know it by the exterior, however, because it has been renovated and is a nondescript private residence. Yea, my Hanson ancestors lived here early on too.

Before breaking for lunch at Cactus we walk around the monument pictured above, where the Denny Party landed on the beach on a dreary November day (just like today) in 1851. 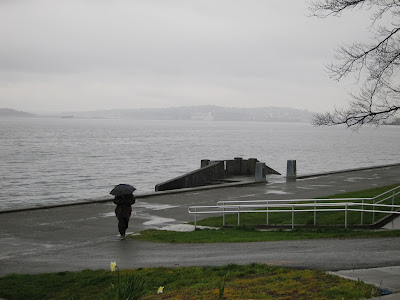 Cactus is across the street from the beach and the site of the former Stockade Hotel, which was owned and run by my great-grandfather and grandmother in the early twentieth century. I'm sure the excellent Southwestern-style cuisine at Cactus is a far cry from what they served at the Stockade. Everything we order is wonderful, including my brother-in-law's huevos rancheros, the mushroom quesadilla my sister orders, and my Southwestern Caesar salad, sprinkled with black beans and corn and topped with grilled wild Mexican prawns. And the green chile biscuits truly melt in my mouth.


Our last stop is the Log House Museum a block inland, operated by the Southwest Seattle Historical Society. They call the museum a local gem in West Seattle, and the building is indeed a beautifully restored 1904 log building surrounded by a Northwest native plant garden. Friendly museum manager Sarah Frederick tells us the building was a carriage house for the old Fir Lodge, which later operated as the Homestead Restaurant (now closed). 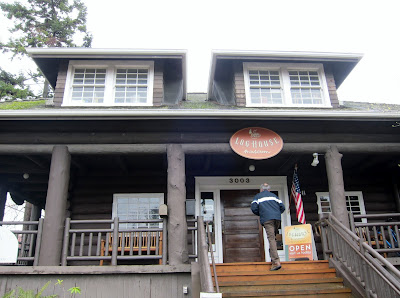 I really do feel briefly transported back to another time in this log structure so unlike most houses and buildings throughout Seattle today. There's an eclectic mix of memorabilia, including a Seafair pirate costume, a few priceless small baskets woven by  local tribal members, a replica of the vessel Dix that sank in Elliott Bay (Puget Sound's worst maritime disaster), some pieces from the Stockade Hotel, and more.  There are also many historical photographs and information for research purposes. And a cool little gift shop where I purchased a great T-shirt.

We continued on to other parts of the city, but this Alki segment was a nice little two-hour chunk of time that would be educational for kids as well.

How about you? Do you have any connections to Seattle's recent or historical past?


When You Go
Here's a map of the Alki Point area, with the museum indicated. The Log House Museum requests a small donation of $4. The Alki Point Lighthouse and tower is open on Saturdays and Sundays from June to August from 1:30 p.m. to 4:00 p.m. For more information, call (206) 841-3519. Because traffic and parking can be difficult along the Alki waterfront on nice summer weekend days, I suggest taking your bicycle  or walking between these points rather than driving.

Also of note:  Alki, commonly pronounced Alk-eye, was originally pronounced Alkee, which is Chinook for "bye and bye." The switch was made during the 1930s, but apparently the West Seattle schools are now teaching the correct pronunciation in local grade schools. Our family always used the original pronunciation.
Posted by jill 12 comments: Links to this post