Usually I ease into the new ski season by starting out on mostly groomed blue runs to loosen up and get my ski legs back. (Sound familiar?) But when the first day brings blue skies, a foot of fresh powder, and avid skiing buddies who challenge me to keep up, I can’t resist pushing it. Even though I know certain neglected muscles will scream at me the next day.

Such was the case last Friday at Crystal Mountain, the Pacific Northwest’s premier downhill ski area. Okay, I can hear you Bachelor and Baker skiers grumbling at me now, but c’mon. On OutsideOnline.com, former U.S. Mogul Ski Team member Mike Hattrup recently listed Crystal as number two of his five favorite ski mountains in the U.S.  And as the dude who rode up the High Campbell chair with me said,

“Crystal is a skier’s mountain.”

How true. With bowl after bowl and seemingly endless routes down steep and steeper pitches, many not officially designated runs, it’s a mountain of well-kept and not-so-well kept secrets.

With November storms smashing into the Cascades every few days and the freezing level jumping up and down like a kid on a trampoline, I watched the weather forecasts carefully.  Friday after Thanksgiving was the day to go over the holiday weekend.

I wasn’t alone, that’s for sure.  But I still managed to find a few stashes of untracked pow in which to leave my signature, whooping with joy as I floated down.

And I’ll never tire of the always stupendous view of Mount Rainier, just 20 miles distant, as you crest the ridge near the Summit House above Green Valley. Rainier is, after all, the biggest, most heavily glaciated mountain in the contiguous U. S. (although the second-highest, just shy of Mount Whitney). How many times can I take pictures of Rainier on a beautiful day?  No limits. 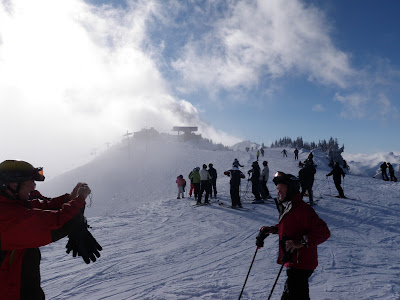 For November, the snow coverage  was good (helped along by new snow-making at the top of Green Valley). Yea, I got one particularly nasty gash in the base of my skis on the southward High Campbell traverse, but Powder Bowl was in fine form for early season.

Also in fine form was Lyndsey, the Snorting Elk cookie-baking maven.  I scooted into Snorting Elk Deli after a great day skiing and snagged one of her freshly baked crocodile spice cookies. Hmmmm.  Still the best around.

So get on up to the mountains, skiers and riders, and start your ski season.  Like my late friend and former Crystal ski instructor compadre Dean Meinert always did, watch the weather and carpe diem. Life is too short to spend those bluebird days indoors. 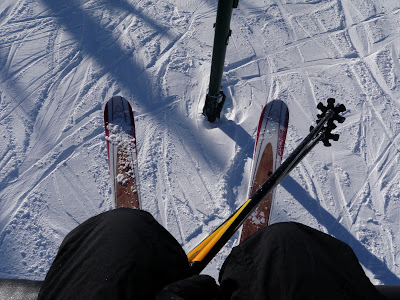 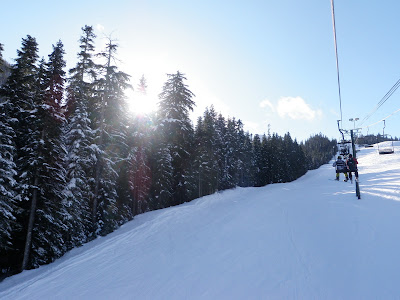 Have you gotten up yet this season? We'd love to hear about your best first-day-of-the-season ever in the Comments below!
When You Go
While Crystal is awesome, there are plenty of great places to ski throughout the Northwest. Here’s a tip to save a little money on your lift ticket:  After buying your first ticket of the season, keep the plastic Go Card they give you and reload online at the Crystal website. You save $5 a day on your ticket and bypass the ticket booths lines. Just flash your card in front of the scanner at the base lifts.  BTW, Crystal did NOT raise their rates this season, as of last weekend.
Posted by jill

Right on, Jill! Glad you made it up to catch some early season skiing. It's shaping up to be another great season in the Cascades. We're suffering in Europe (well, sort of). No snow yet, anyway. Enjoy the bounty of the PNW.
Ciao,
-Lisa

Hey Lisa! Hope you get some snow soon in the Alps. Un bacio

Ethan, you must try a croc spice cookie, spicy and sweet, chewy and crunchy, my fav.

Ohmygod. Crocodile Spice cookies are my favorite. Not that I can eat them. I really shouldn't. But if someone else orders one, I can't be trusted. So sorry we didn't hook up Friday. As you can imagine, we were BUSY. I did get to ski a run with Ingrid Backstrom and Adam Clark, though. When it snows, the pros come out.

hey Kim! I sorta looked for you but yea, was very busy day. I probably could not keep up with the pros yet....