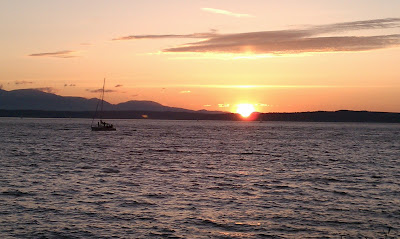 With just 5 minutes to go before the sun sets on this glorious summer solstice, we’re stacked up behind several cars waiting to park at Seattle’s Golden Gardens Park. Will we make it in time to watch the sun slide behind the Olympic Mountains on the western horizon on this longest day of the year?

“Here, will you take a few pictures?” I say, handing the phone to my niece while I maneuver the car slowly forward. She’s already on it. “Mine takes better shots.”

On this first summer night of the year, kissed with a hint of salt in the breeze off Puget Sound, it looks like half the city is here to witness the solstice sunset. And party. Numerous beach fires glow orange, surrounded by crowds of people. There’s something splendidly pagan about it all.

Finally I stop directly behind several cars parked facing the beach, turn on my hazard lights, turn off the engine, and hop out. Totally illegal, but who’s going to be pulling out of their prime parking spots for the next 10 minutes?

Here in Sunset City, I’ll never tire of watching a sunset on the edge of Puget Sound while the water turns shimmery ice blue and the sky fades to crimson-orange, rimmed by the dark blue silhouette of the jagged Olympics. Over on the main beach at Golden Gardens to our right, I’ve never seen so many people gathered there. It’s packed. 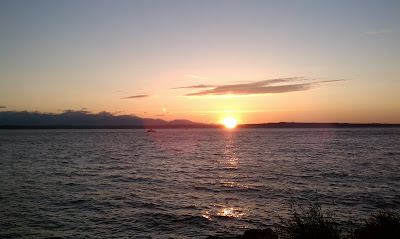 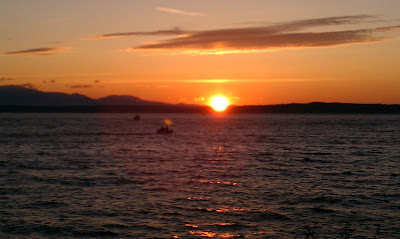 As the sun slips below the mountains to the west, everyone starts cheering and whooping, and I swear it sounds like the Huskies or Seahawks just scored a touchdown. On this beautiful, warm evening, it’s exhilarating. 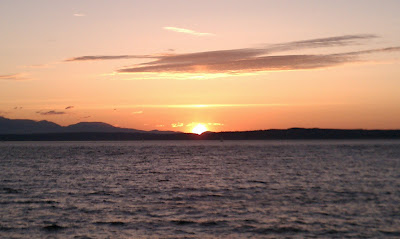 Lindsey and I sing a silly song and dance for a minute because there’s good reason to celebrate. After the record-breaking cold spring we’ve had, it’s summer!

The cheers WERE amazing! And our awesome dance was the BEST way to welcome in the summer!

Something to dance about! Very cool!

Happy Solstice! It was a day to celebrate - pink skies and warm breezes. What a treat.

Barry, yes, wonderful to have something to dance about!

ZD and Mab, thanks! A treat indeed, as if the weather just KNEW it had to oblige on the first day of summer to make up for our chilly and damp spring.

Well, at least there were a few days of sun. Back to the rain today!

Not sure if my last comment went through...I enjoyed the solstice sun as well, but today we're back to rain.

So Jillwin, here's to silly songs and dancing on the Soltice. Looked like something golden happened in the 'Gardens'. DB

This is our first year celebrating the solstice in Washington! Is this a kid friendly event??

Mama Nature,
Sure, down at Golden Gardens I think it would be fine to take kids. Can they be up that late? Sun won't set until close to 10 pm on the Solstice here. Enjoy and get there early with a picnic dinner to find a parking place. But great fun!

We will be there! What time would u suggest?

Also-which day will this celebration take place? I thought it was 20th but so many events are taking place the 19th?

Mama Nature,
This will be on the actual Solstice, which is the 20th. It's not really an official event, but people just come from all over to watch the sun set form the beach at Golden Gardens, have picnics, beach fires, etc. Because it's the longest day of the year, it will be extra crowded if the skies are clear. If it's cloudy, not so much, no sunset to watch!