Mission Ridge: Skiing the Dry Side 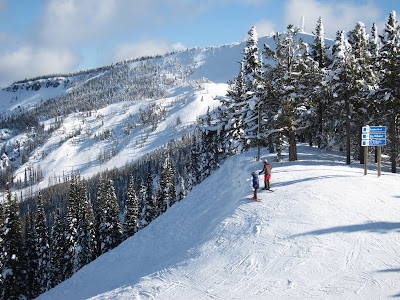 As I’m slicing smooth turns through sweet corn snow on this brilliant sunny day, I ask myself one question: Why haven’t I skied at Mission Ridge in over a decade?

I can think of answers, but no good reasons. Because today I’m having an absolutely AWESOME time skiing this gem of a ski and snowboard resort in central Washington.

With our dry El Nino winter and warmest January on record, I figured conditions would be icy and the snow coverage marginal. Instead, I can’t stop smiling—on the groomed runs the snow is firm and fast but forgiving. As of the day I ski there, the temperature hasn’t reached above 32 degrees since around Christmas. And of course this far east of the Cascade crest, the climate is more arid anyway. Less moisture = drier snow. Pretty simple equation, huh? 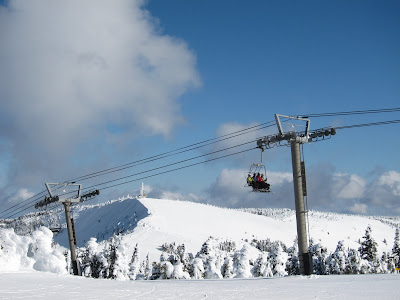 Although I drove alone the 12 miles from Wenatchee, by my second run I’ve been invited to go out hiking on Windy Ridge. But Mission is like that—if you don’t come with friends, you’ll find some soon enough. My guide today is Roger, a French ex-pat who lives in Wenatchee, and his buddy Brent. They’re both funny, friendly, and good skiers. 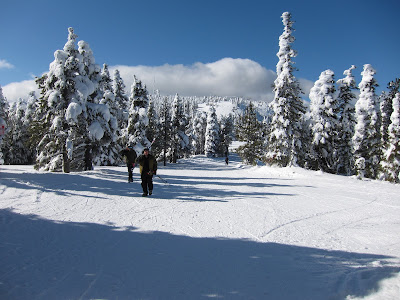 “Once you hike up here and ski down, you’ll want to buy a season’s pass,” says Roger. Being from “the Coast” doesn’t deter lots of people from doing so. Over half of the people I meet on lift rides are from the Puget Sound region.

At an elevation of almost 7,000 feet, I get a good cardio workout hiking up the ridge. We stop a minute to catch our breath. 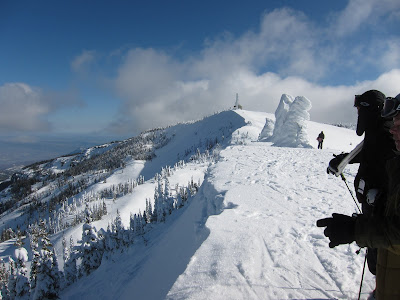 Then Brent drops first off the ridge, making a series of tight turns through the sugary snow. My run isn’t quite so pretty, but it’ll do. 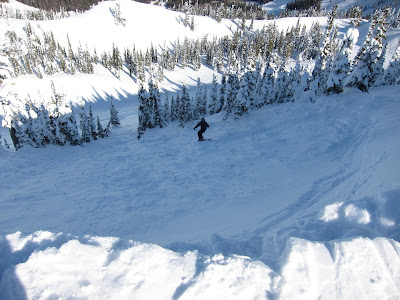 “Where next, Roger?” says Brent, ready for more out of bounds exploring. For our next run off the top of the quad, we head the other direction, skirting along the ridge above the Bomber Cliffs before heading down. Roger points out some holes in the snow. “Those are hot spots.” 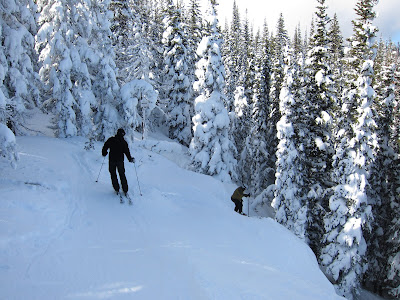 After a short but steep run down, Roger and I are ready for some cruiser runs. Mission has lots of those. 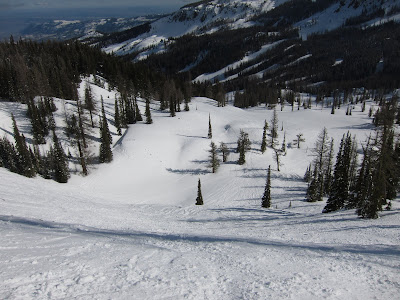 Every time I get off the chairlift at the top, I have to take in the panoramic views. Today clouds obscure Mt. Rainer and Mt. Adams to the south, but the snowy Cascades stretch north and west like a rumpled quilt of blue and white. 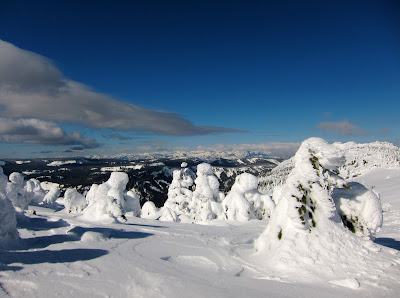 My tired legs unfortunately don’t want to ski as long as I do. I say my goodbyes to Roger and Brent and savor my last run back down the mountain. I really don’t want to stop, but friends beckon.

But I still can’t stop smiling as I’m driving back down to Wenatchee. It’s fantastic days like this that make me remember how much I love to ski, how much I love the mountains, and how fortunate I am to live here in the Pacific Northwest. 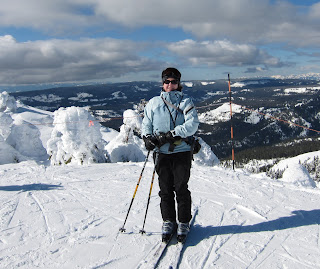 When You Go
Mission Ridge is just 12 miles south of Wenatchee in northish-central Washington. If you’re coming from the west side of the Cascades, I recommend driving over to the Wenatchee Valley the night before. I prefer driving I-90 over Snoqualmie Pass from Seattle, then north over Blewett Pass (Highway 97) to State Route 2 and on into Wenatchee. Lift tickets are only $50/day for over 2,250 vertical. And special thanks to Roger and Brent for a fun few hours skiing!

OK - that made me and Glenn want to abandon all plans and take off for Mission Ridge this morning!

Nice! Glad your trip over was more than well worth it.

Great piece...makes me want to get over there again and this time go skiing!

Great blog, great pictures - no you have to hit up McGlinn's after skiing for some of the best, freshest, pub grub from scratch (at unbelievable prices) that I've tasted:

It's become our standard Saturday night spot - but get there before 6pm unless you don't mind waiting up to an hour for a table! (Even the kids' food is made from scratch, and generous portions. The pasta is also home made, incredibly fresh and tasty, very generous portions. Fresh and inventive salads (roasted capers, pumpkin seeds and feta on the blackened chicken Caesar). My only complaint is that there isn't one in Issaquah!)

Thanks Todd, Susan, Lesley, Carina, and Jennifer - Yes, it was a beautiful day indeed. And ever been the following Saturday I'm told. Jennifer, I should mention McGlinn's - we had dinner there!

Wow! Great pictures! I just went skiing at Mission Ridge yesterday and it was as awesome as you described it. I wish we had skiied Windy Ridge, but we had a blues-only skiier with us and didn't want to abandon him. Next time though, I definitely want to try it!

Thanks for the great story!