College Football in the Northwest: Playing for Apples and Roses 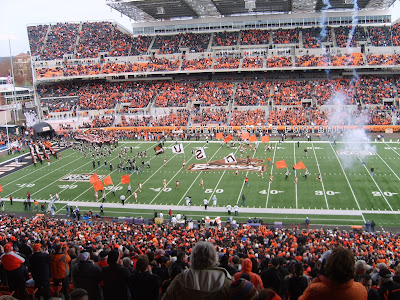 Sure, the Northwest is full of hikers, foodies, and green-living latte sippers. But just like any region in America, we love our sports teams. If you really want to separate the region’s transplants from the true locals, follow the traffic jams to Husky, Reser (formerly Parker), Martin, or Autzen stadiums on a fall Saturday afternoon. (Or this week, Thursday night in Eugene.) You’ll find thousands of raucous fans cheering on their Huskies, Beavers, Ducks, or Cougars.

Although the national media gives more press to the Pac-10 California teams, here in the Northwest we have produced national championship teams (most recently the University of Washington Huskies). And this week the Oregon and Oregon State civil war game is for the Pac-10 Championship and Rose Bowl—a first!

The History
I’ll admit football doesn’t exactly fit my profile (the first sentence of this post sorta describes me). But Husky football is in my blood. It’s a family thing. I’m in the fourth of five generations of my family who have gone to the U Dub. 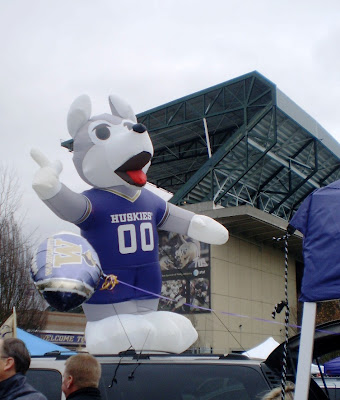 My dad took me to my first Husky game when I was a wee girl of 9. I was fussy and annoyed by the gruff, cigar-smoking man behind us. By junior high, though, I was hooked.

The Party
Last Saturday I went to the Apple Cup to watch the Huskies cream the Washington State University Cougars. As I followed the streaming crowd to the game, the buzz outside the stadium was palpable. Alumni from the Husky Marching Band gleefully performed “Louie Louie”—a Northwest classic—to get the fans pumped up. Huddled in a big circle and swaying with the music as they played, the musicians’ enthusiasm was infectious. (Unfortunately, a bill to change the Washington state song to Louie Louie didn’t pass in the state legislature.) 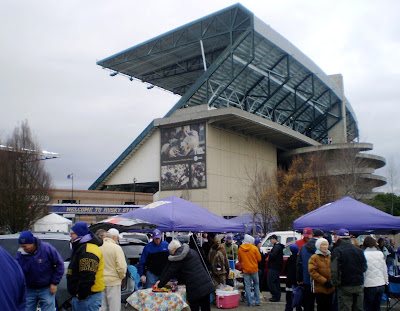 Then it was on to some tailgate parties, where I laughed and exchanged hugs with college friends I hadn’t seen in a while. “Want some of my beef stroganoff?” asked Carina. How lucky was I to stop by her tailgate for the one game of the year when she brings her signature dish? Very. (See her recipe below —thanks Carina!)

The Game
I’m not so much into the details of football. My favorite part of each game at Husky Stadium is when Dubs, the Malamute Husky mascot, comes bounding into the stadium ahead of the team before opening kickoff, tongue and tail wagging. And I love the view of Union Bay/Lake Washington out the east end of Husky Stadium, voted the most scenic stadium in college football. 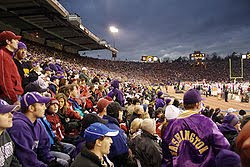 So this year’s Apple Cup was a blowout, a 30-nothing win for the Dawgs. Governor Chris Gregoire (a UW grad herself) came onto the field after the game to present the huge Apple Cup trophy to the Huskies.

It’s all fun and crazy and silly. And I’ll do it again next season.

When You Go
Hey, you can still catch a game this Saturday at Husky Stadium when the Dawgs take on the California Golden Bears. The school is offering four free tickets to Saturday's game to all active police, military and fire department personnel — with applicable ID. 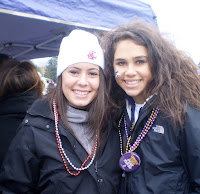 Those interested can call or go to the Husky Ticket Office Monday-Friday during business hours, or the ticket window at the Northeast Plaza at Husky Stadium on Saturday. For info, call the UW ticket office at 206-543-2200. Or be sure to watch the Oregon Ducks and Oregon State Beavers play for the Pac-10 title!

Buy 1-1/2 # pre-packaged flat iron steak and ask the butcher to cut it into ½” thick slices.

In large heavy pot, melt 1 T. butter (enough to coat bottom of pan) and brown the meat on all sides over medium heat.

Add one whole, finely minced yellow onion (I use food processor to make sure it’s very fine). Cook on low simmer until onion is tender (20-30 minutes).

Place 3 T flour in a jar and add ¼ c. beef bouillon and ¼ c. red wine. Shake until smooth. Add slowly to the stroganoff and cook through on medium until sauce thickens (4-5 minutes). Turn heat to low and add 1/3 to ½ c. sour cream (depending on whether you want it to be more of a beef bourguignon (less) or creamier stroganoff (more). Do not boil after this or cream will curdle. Season to taste with salt and pepper. 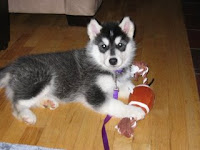 Serve over hot pasta or rice. Best enjoyed with good friends and family.

Special thanks to Dubs' blog , where I got the photo of Dubs at 10 weeks old.
Posted by jill

One of my favorite posts as it kind of sums up the fall experience for football fans all around the country!

One correction: you are fourth generation out of five, starting from your great grandmother, to two grandparents, two parents and on to you.

GO HUSKIES! What a wonderful post, I am so bummed I missed the game. And all the wonderful food!

Cool!
And I will have to try that recipe….

Thanks for the correction Anneskers!

Lindsey, was sorry to miss you too but there will be more Husky victories to witness!

Jennifer, let me know if you make the stroganoff.

Good thing it wasn't this week with these frigid temps! You really captured the energy of the experience, Jill. I can taste the stroganoff and I'm ready to be part of the massive human wave. (I've heard a few times that originated here in Seattle. Fact? Myth?) Dubs blog is height of sweetness. Fun post for such a NW tradition!