Wolves in Washington: They’re Back! (and you can help them stay) 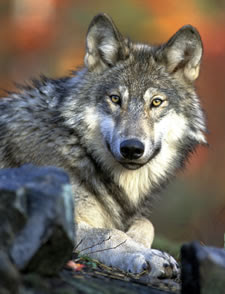 Have you ever heard a wild wolf howling in the night? This possibility is now real again in Washington for the first time since the 1930s. But my brief wolf story starts just over 15 years ago: With unconfirmed reports of gray wolves in Washington’s central Cascades in the early 1990s, it was time to get real proof. During the summer of 1993 I volunteered to participate in a wolf survey for the U. S. Forest Service’s Cle Elum Ranger District.

Based on sighting reports, a very enthusiastic Forest Service wildlife biologist trained a group of willing hikers/tree huggers (self included) in wolf survey protocols. On six weekends spread over the summer, we camped above a remote, larch-filled canyon on Table Mountain above Ellensburg and took turns howling for wolves at different designated “stations” along the rim.

Yes, wolves do howl back to humans if you can fake a good howl. We didn’t get any responses that summer, but I still remember vividly the excitement of the possibility. I loved those warm summer nights. We hiked through subalpine forests to our howling stations, sometimes with just the full silver moon illuminating our way. 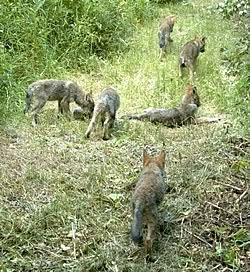 There are now two confirmed breeding pairs of wolves in Washington—one pack is now in the Okanogan region of north-central Washington (the Lookout pack), and another is in the northeast corner of the state (the Diamond pack). These animals have found their way back to Washington 70 years after being decimated by bounty hunters.

Last night I attended a public hearing at REI’s Seattle flagship store on the recently released Gray Wolf Conservation and Management Plan Environmental Impact Statement. The place was packed! Being Seattle, the crowd was heavily pro-wolf, but sprinkled here and there were a few hunters wearing old baseball caps and a few ranchers in HUGE cowboy hats. Did sparks fly?

Yea, a little bit. But we Northwesterners are generally a well-behaved bunch who prefer to avoid conflict. The hearing was one of several around the state sponsored by the Washington Department of Fish and Wildlife, who drafted the plan. Anyone and everyone were invited to take their turn and speak for a few minutes about the plan. I was too shy to take the microphone, but comments ranged from heartwarming fluff to substantive biologist opinions to impassioned and angry cattlemen who think any wolf is one too many. “If you’ve ever seen a baby calf that’s been torn apart by a wolf or coyote, it isn’t a pretty sight,” cried one rancher. “We work hard to raise these cattle. If I see a wolf attacking one, I’m going to do something about it.”

“I’ve seen wolf-kill, and it isn’t pretty,” said a woman later, who grew up on a ranch. “But,” she added “a slaughterhouse isn’t too pretty either.”

What YOU Can Do
The upshot of my rambling is this: Biologists I know tell me the plan’s recommendation of 15 breeding pairs to remove legal protection of wolves is not enough to sustain a healthy population. Most ranchers and hunters want a lower threshold. I'd like to think we can have a healthy wolf population and have it work for hunters and ranchers. If you want to see a healthy wolf population back in Washington, comment online here by January 15, 2010. Be as specific as you can when you comment. Wolves are native to the Northwest. They help restore balance to heal a damaged ecosystem, as evidenced in Yellowstone. Help heal the wolf population with your comments. Thanks for caring!

Special Thanks
The lone wolf photo above was taken by Gary Kramer of the U.S. Fish and Wildlife Service. The wolf pups are from the Lookout pack and that photo was taken from Conservation Northwest's webcam.
Posted by jill

Thanks for the information, Jill. If we can't share the land with wild and free animals, there's no hope for humanity.

Thanks for the post and the notice about how to help!

Awesome Jill! I LOVE your blog, by the way!!

Cool, Jill! Thank you, thank you for this great account of the Seattle
hearing! It sounded tremendously interesting and productive. Hoorah for
wolves, and Seattle supporters. We'll tweet it out for sure. Erin,
Conservation Northwest

Lisa, thanks for comment all the way from Italy!

Barry, the online link makes it pretty easy to comment. Thanks for checking it out.

Erin, glad I could help spread the word, but a small gesture compared to Conservation Northwest's wonderful work. That survey in '93 involved some former NWEA staff and current CNW staff.

Love the line about the slaughterhouse not being pretty.

Jill - I love your blog (and "blog" does not seem like the right word at all). Anyway, you should be famous. You could make Oklahoma look irresistable.

Thanks so much for this post! I see both sides of the spectrum: those of people wanting to protect such a unique and special animal (I am big time pro wolf) and those wanting to protect their livestock (and potentially domestic animals) from the wolves themselves.

It seems there needs to be a happy medium between conservation of the species and protection from them.

This reminds me of a current issue in Seattle. Raccoons are protected by law, and even if they injure/maim a domestic animal or human they are still protected from being shot by law enforcement or anyone else. I disagree with this, thinking there need to be parameters set so that people can protect themselves who are a threat to either themselves or their animals.

Again I have to comment that I am a HUGE animal lover (I am a full time professional pet photographer), but I'd hate to see us Washington State tree huggers be so biased in our opinions and laws that we completely disregard the needs of those living near the wolves. Again, there needs to be a happy medium. I recognize this would be very complicated and it would be impossible to please everyone, but an attempt at least needs to be made. I'm sure this will be a long process, but it will be one that will be interesting to watch!

Nice blog about the wolves - let the wolf reclaim it's place in the ecosystem. The greatest predator is not the wolf, but the two legged variety.

Susan,
Thanks for your flattering comment! Maybe we'll all get our 15 minutes some day.

Cowbelly - you raise some very important concerns. I agree and hope my post didn't come off as dissing the ranchers. It is very difficult to walk the line, and the WDFW acknowledges that there are biological and commercial compromises with the plan. It's too bad that the reimbursement process might seem to be too cumbersome for livestock loss.

There are apparently healthy wolf populations in the upper Midwest although I don't think there is as much ranching there.

Larry, thanks, I'm with you too!