I recently spent a perfect afternoon on the summit of Chadwick Head. I can’t think of a better place to unwind and let your worries float away. And there was nobody else here this lovely August day. 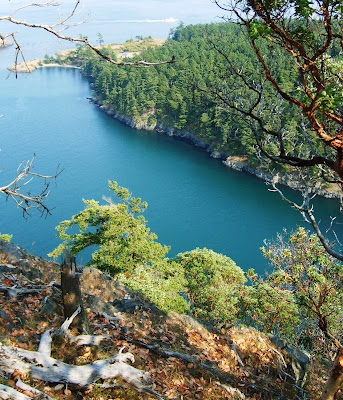 When I arrive on Lopez Island, I make a beeline to Watmough Bight on the southeastern edge of the island. After parking at the end of the gravel road, I walk through the tunnel of leafy green trees to the beach. 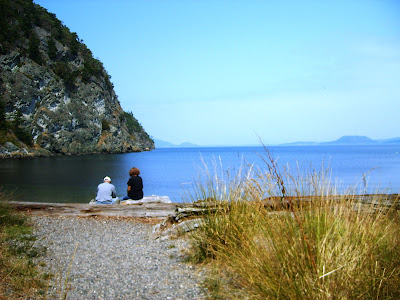 A father and son kayak past in the tranquil bay as I walk along the beach. 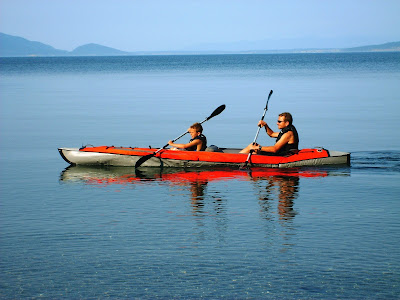 Just shy of the rock wall at the other end of the beach, I hop over a few driftwood logs and cut inland on a narrow trail through the tall shrubs. Soon I’m in the forest where Chadwick Head rises steeply to my right. 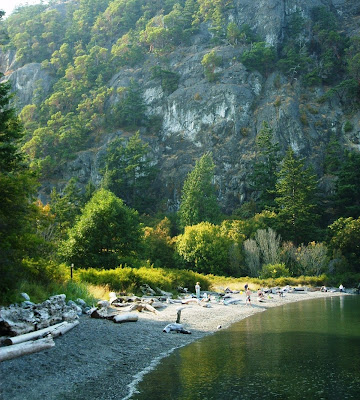 About 10 minutes into my hike I stop and gaze over the natural wetland behind the beach. 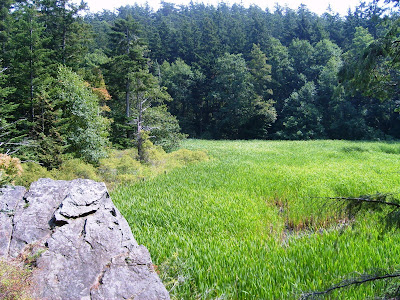 After angling up the hillside along the loose trail, the forest clears into a series of rolling brown meadows interspersed with madrona and pine trees. Surely I’ll see other people up here on this sunny afternoon. But it’s just me and the ravens and dragonflies.

Remember the opening scene in the Sound of Music where Julie Andrews flings her arms wide and breaks into song on an Alpine hilltop? That’s what I feel like doing up here. 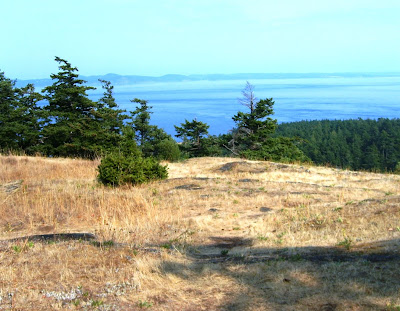 I meander along the hilltop until I go as far as I can. Below the hill drops away into the forest and azure waters of Rosario Strait beyond. I settle on the ground at a comfy spot just below a rocky outcrop.

Then I just sit. 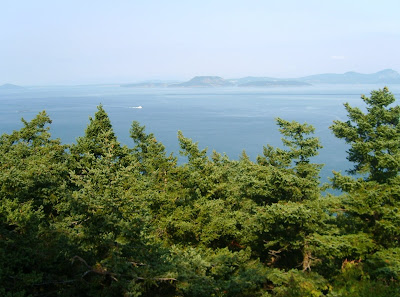 After a while I pull out the Tao te Ching and read some ancient words of Lau Tzu. This one strikes me today:

I decide the truth of just what to do right now is to just breathe in the fresh clean air and exhale my pent up stress about work, money, family, life. Because this is my life at the present moment, and it’s pretty sweet.

I lean back against a rock and take in the view below. Across the strait lie several forest-covered islands—Burrows, Allen, Fidalgo, and northern Whidbey. 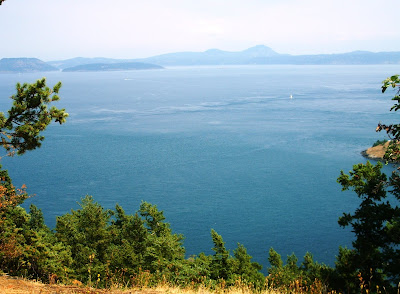 From the north a huge oil tanker comes cruising past not that far offshore, sinister-looking in its scale and contrast to the natural marine setting of the San Juan Islands. 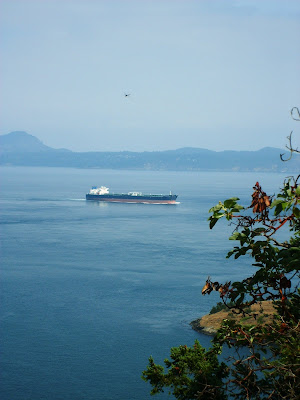 Then I hear a loud slap and splash in the water a few hundred feet below and see a white circle of bubbles rise to the surface. Perhaps it’s a seal or sea lion trying to stir up some fish or just messin’ around. 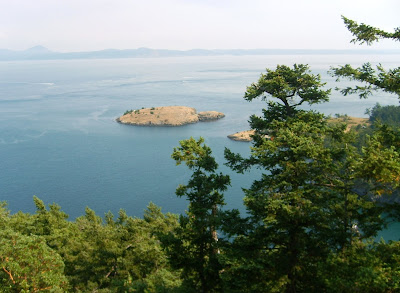 Drowsy with all this pure island air and sunshine, I close my eyes and drift into a light sleep. I’m awakened by the drone of a small propeller plane, which dips its wings and heads straight in my direction, passing just a hundred feet directly above me. I think the pilot saw me.

A few hours pass and it’s time to head down to meet up with some friends. I see a makeshift swing someone has rigged onto the strong branch of a gnarled pine tree. It’s a little high, so I have to leap up onto the seat, which gets me really swinging. Now this is moving in harmony with the present moment. I highly recommend it. 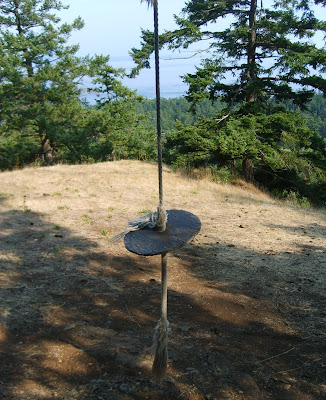 When You Go
There are no signs to Watmough, but it’s not that big an island. Eventually you’ll find your way there. Click here for a map of the island showing Watmough and here for another more detailed map. Since this is a nature preserve and valuable ecosystem, be respectful of this special place and leave no trace when you leave.
Posted by jill 8 comments: Links to this post 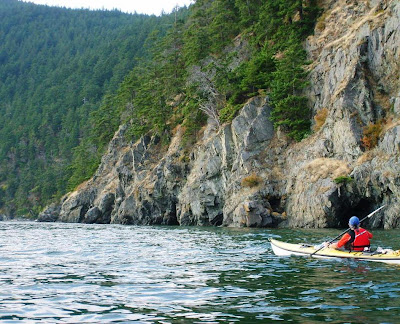 You don't have to travel far from the city here in the Pacific Northwest to get away and revel in Nature's embrace. Head to most any Salish Sea island, and you'll find that crossing the water from the mainland quickly takes you worlds away.

On a warm August weekend, a friend and I kayak to Lummi Island, the most northeastern of the San Juan Islands, for an overnight camping trip. For being so close to Bellingham and a short ferry ride from the mainland, the south end of Lummi feels surprisingly remote.

Putting in and Taking Off
On Saturday morning with a light wind at our backs, we haul our sea kayaks down to the beach at Gooseberry Point just north of the Lummi ferry terminal. We’ll paddle about 6 miles south down Hale Passage to the rustic but lovely Lummi Island Department of Natural Resources site.

After we manage to stuff all our camping gear (and ourselves) into the kayaks, we shove off into the water. (Packing and loading a kayak efficiently for camping is an art that I’ve not entirely mastered.) Today we’re lucky to have fairly benign water, with minimal currents and not much chop. Conditions in Hale Passage can be tricky and dangerous for kayakers, so we time our trip to avoid the peak flood current. 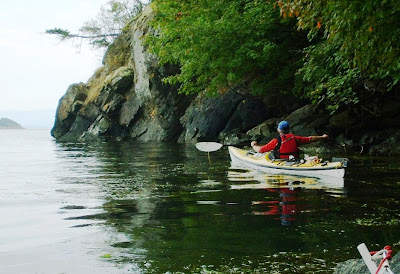 With strong tidal currents moving around Puget Sound’s many islands, always check the tide charts before any paddle—something novice paddlers often neglect to do.

Lummi lies directly across the mile-wide passage from Gooseberry Point, but with the strongest flood current in the middle of the channel, Norm suggests “Let’s angle across to catch as much current as possible.” As we reach the Lummi Island side of the passage, Norm points out the dramatic topographical difference between the relatively flat northern half of the island and the hilly southern half. “There’s a thrust fault extending midway through the island,” points out Norm, who happens to be a hydrogeologist. Southern Lummi is a long, forested ridge with rocky headlands that plunge steeply into the water—especially on the west side of the island. It’s also a 661-acre Natural Resource Conservation Area mantled with mixed-aged forest of mostly Douglas fir and madrona trees. 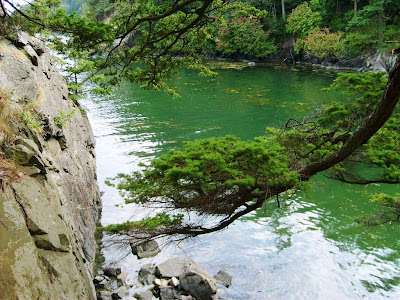 We pull into a lovely little tree-lined cove, pull off our cockpit spray skirts, and climb out onto the rocky beach. With government budgets slashed, the Lummi DNR marine campground is maintained largely by volunteers from WAKE (Whatcom Area Kayak Enthusiasts) club. Thanks WAKE!

I start pulling dry sacks out of my kayak and piling them on the beach, then need several trips to ferry gear up the steep steps to the campsites nestled in the forest above. “Does this spot work for you?” says Norm as he nabs a campsite with a picnic table and a peak-a-boo view down to the cove through the trees. 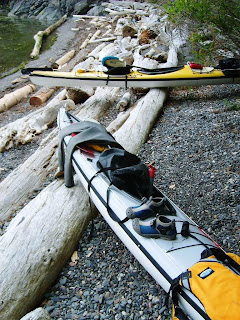 Exploring
When our tent is up and gear stashed inside, we paddle another mile to the south end of the island and up the west side to explore. At this end of Lummi, there are no decent landing spots along the steep, rocky cliffs.

As we approach the very southern tip of Lummi, several forest-covered islands to the south come into view—Samish, Guemes, Cypress, Vendovi, and Sinclair. Even though it’s close to slack tide, there’s still a strong, choppy eddyline to cross as we round the end of the island. 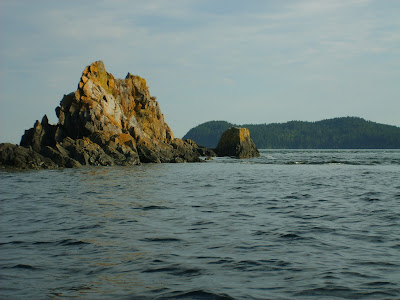 Adrenaline courses through me as I power paddle through the squirrely water and the lowering sun hits me full in the face. Be careful if you venture here—an experienced solo kayaker died a few years ago here after he capsized in the strong currents.

For the next hour we mosey up the western shoreline past wild, untamed, and precipitous rock headlands. A few miles west across Rosario Strait looms the blue silhouette of Mount Constitution on Orcas Island. Visible in the distance beyond Orcas are the mountains of Vancouver Island. 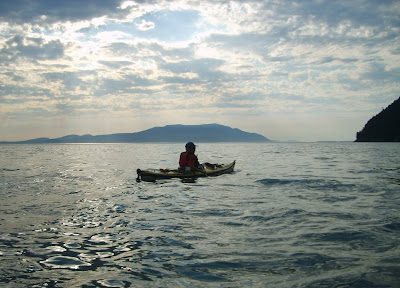 On the southern horizon are the Olympic Mountains, backlit by the lowering sun.

Only one power boat and three other kayakers are out here on this warm summer weekend evening. We pass them and soon they’re gone. I’m always amazed at the solitude you can find at beautiful spots in this populous region.

“Keep your eye to the south end of the island,” says Norm as we turn around and head back south. “The Alaska Marine Highway ferry should be passing by pretty soon.” 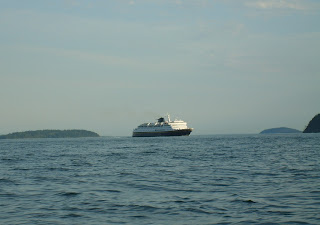 In a few minutes the big white ship comes barreling around the south end of the island a quarter-mile or so away. Soon it recedes to the north. We both decide that rolling our kayaks on that boat and heading to Alaska is a dream trip.

Returning
Another warm morning greets us after a fitful night sleep—I rarely sleep well camping, although I love to camp. Go figure. We pack up the kayaks and head back north, but today we’re battling the tide and wind. Still, it could be much worse. Three hours and sore muscles later, we’re back at Gooseberry Point, tired but happy.

When You Go
Be sure to check the marine forecast and current and tide tables if you plan a paddle to Lummi. And go early on a weekend to snag a good camping spot. Bring your own water since it’s a rustic, dry campsite. And leave no trace when you leave!
Posted by jill 2 comments: Links to this post