Spring Skiing in the Northwest: Get out there! 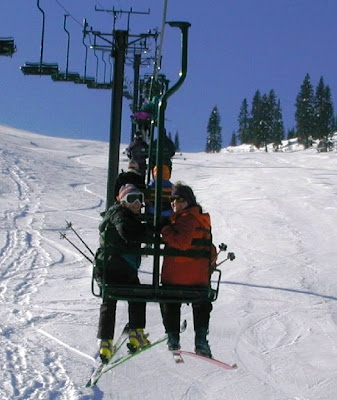 By now most people have hung up their skis or boards for the season. But not everyone. Lift lines are mostly nonexistent, there’s still tons of snow in the Cascades, and often (well, sometimes) the sun is shining.

Throw those skis on top of your rig, stuff your pack with sunscreen and a light parka, and be sure to bring your rain gear just in case. Then head on up to the mountains.

With the big dump of snow that fell in the central Cascades last week, plan to be surprised at the lingering snow banks on the side of the road. Last weekend I headed up to Snocrummie (Snoqualmie) due east of Seattle, while my friends Andy and Mark went to Crystal Mountain about 90 miles southeast of Seattle. My friend Matt headed up to Mt. Hood southeast of Portland. My friend Greg was up at Mt. Baker. And Alex went to Whistler in B.C. north of Vancouver. Lots of choices, at least through April.

With longer days and mostly warmer temps, spring skiing is a little more chill than chilly midwinter. The days get warmer instead of colder as the afternoon draws to a close. Or just ski the morning and get home in time for an afternoon barbeque or gardening. But on those sunny, warm days, relax on the deck outside the lodge and maybe grab a hamburger off the outdoor grill.

Morning can start off cold and you need your full winter parka, hat, and gloves. Last weekend at Snoqualmie I was bundled up and chilled on my first lift ride up. The snow was fresh and soft. By noon I’d shed the parka and hat and did a face plant when I came fast out of shady grove and got stopped by some sticky, slushy snow. Call it Cascade concrete, peanut butter, or overcooked corn. 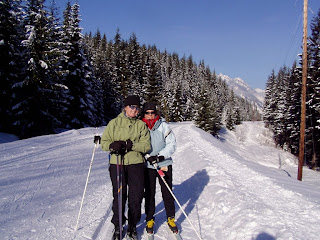 Sometimes you hit it just right and have one of those epic days. Years ago a friend and I were skiing up at Blackcomb the first weekend in June when most everyone else had long since moved on to their sailboats or tennis courts. For several days prior, it snowed a couple feet in an unusual late spring storm. When we got to the top of the mountain, we had the place almost to ourselves. And then the lower mountain lift malfunctioned for a while and no one else was coming up. Can you say skier’s nirvana? All that untracked fresh snow, most of the other skiers down below. Matt and I sliced our figure 8 signatures all over Seventh Heaven. I still smile when I think about it.

Then there was the time Claudia and I cut classes at UW and skied in shorts and bikini tops up at Alpental on a warm early May day. A little risky, but we were only 19. You’re only a teenager once, right? Enjoy all that late season snow—it’ll be months again before the snow flies.

When You Go
Check out the links to all the ski areas I listed above, plus Mount Bachelor here. Bring strong sunscreen with zinc oxide. Have fun.
Posted by jill

Your post captures the essense of spring skiing! I'm never ready to give up on the ski season by the time spring rolls around. There's nothing quite like slush bumps on a sunny day, and the lodge burgers never taste better than outside on a deck in spring. Plus, the lodging at Whistler gets much less expensive.

We went to Timberline just this Saturday and it was friggin gorgeous. Little bit icey in the morning, but by 11am it was perfect and everything except Palmer was open. Glad our season passes extend till May and hope the ladies do a bikini snowboarding photoshoot again like they did last year.
Cheers Jill!

Hey babe, any photos of you and Claudia, the skippers?
M

Hey Jill
I sure smiled when I read your most recent blog!
Claudia